Our hike down from Wild Horse Window was scattered. Eldon, Debbie, and Phil took off ahead of everybody else, then I came somewhere in-between with Finn and Sputnik, then the Losees and Herb, and finally Taffy. Herb went back to help Taffy down the last bit. Eldon struck off on his own path straight toward camp across the rock rather than winding through the wash where we’d come up. 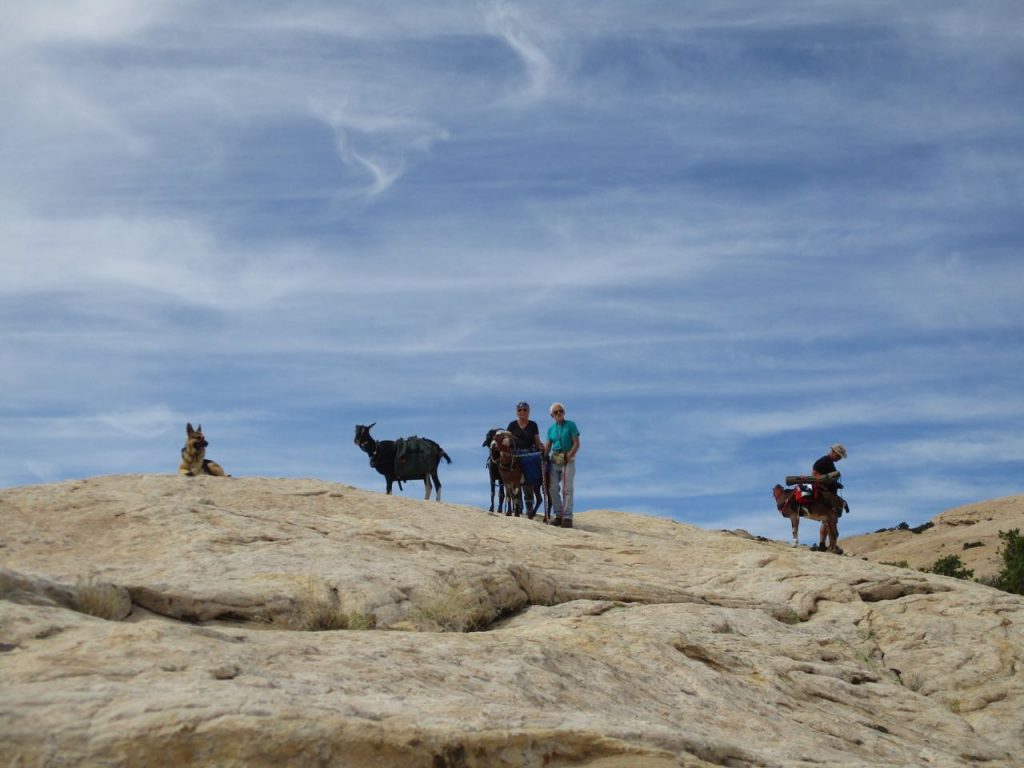 Phil went back down the wash with Debbie, but Finn and Sputnik, who were with me, saw where Phil went. I tried to follow Eldon across the rock but Finn and Sputnik would have none of it. They wanted to follow Phil on the familiar way they’d come up! They stood between everyone and refused to budge until I climbed back up to get them. 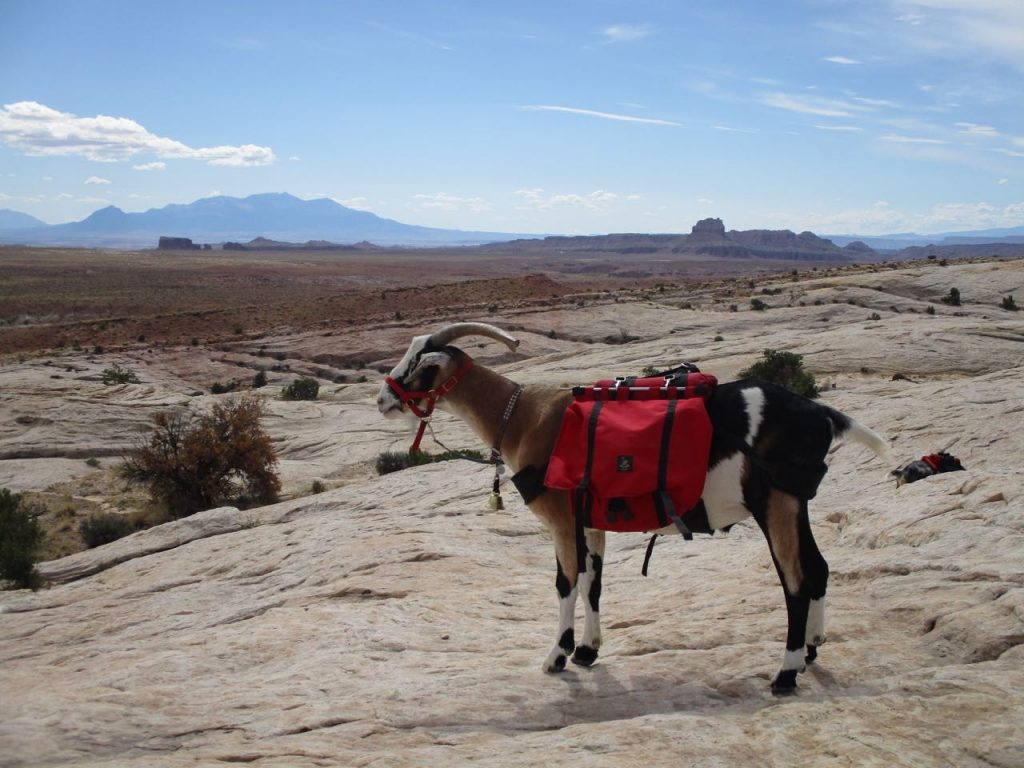 “Stop it Finn! Stop being prettier than me!” 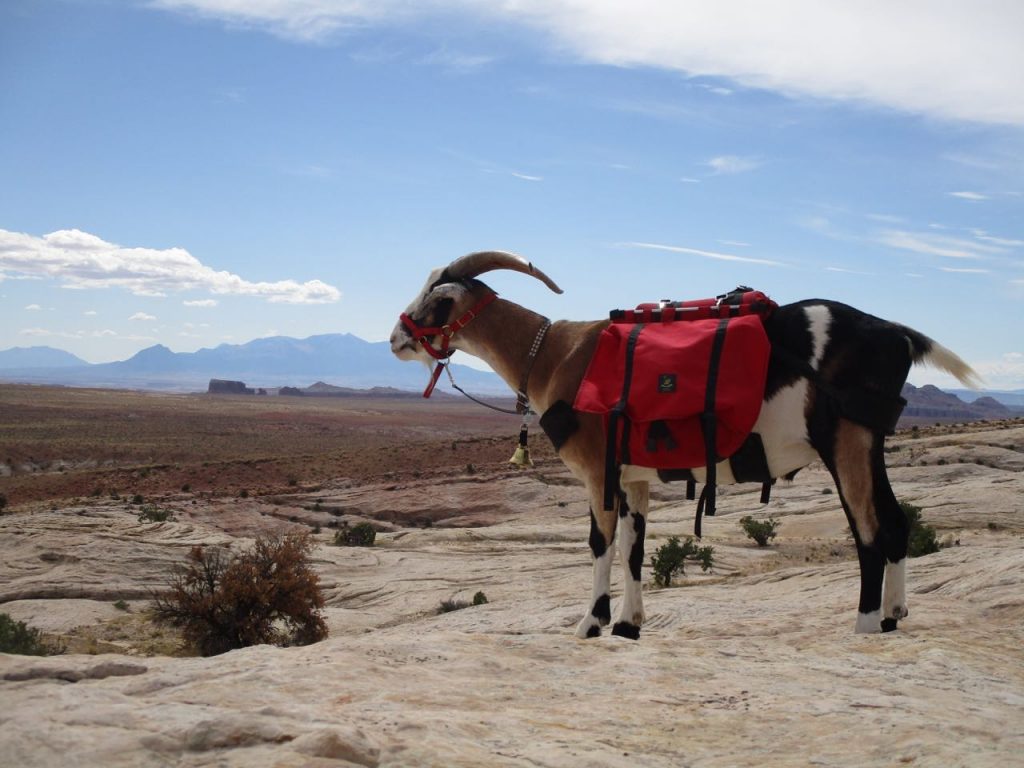 Once I dragged the boys away from the group, they finally reluctantly agreed to follow me… at a distance. I came upon an interesting rock formation with some small, strangely-shaped chunks lying around it. I wanted some nice photos of the goats standing among the odd rocks, but they weren’t in the mood for photos and kept wandering back the way we’d come, scanning the far horizon for Phil. This was the best I got before they wandered away. 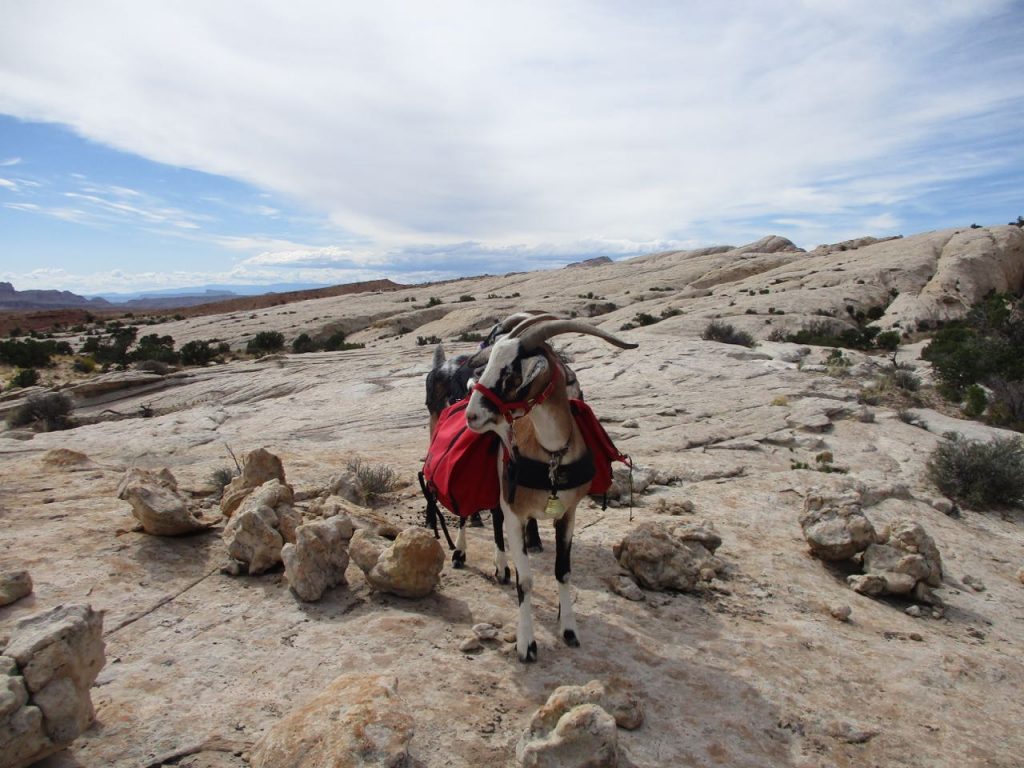 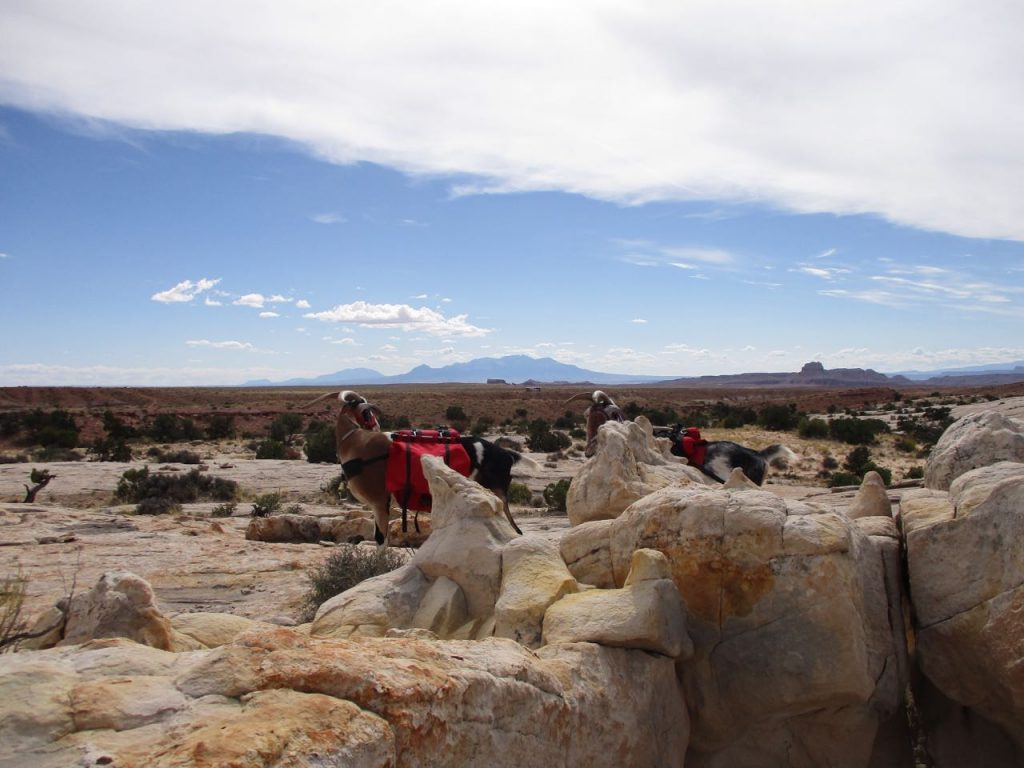 “Huh? We’re busy!” (And then they disappeared behind the rock.) 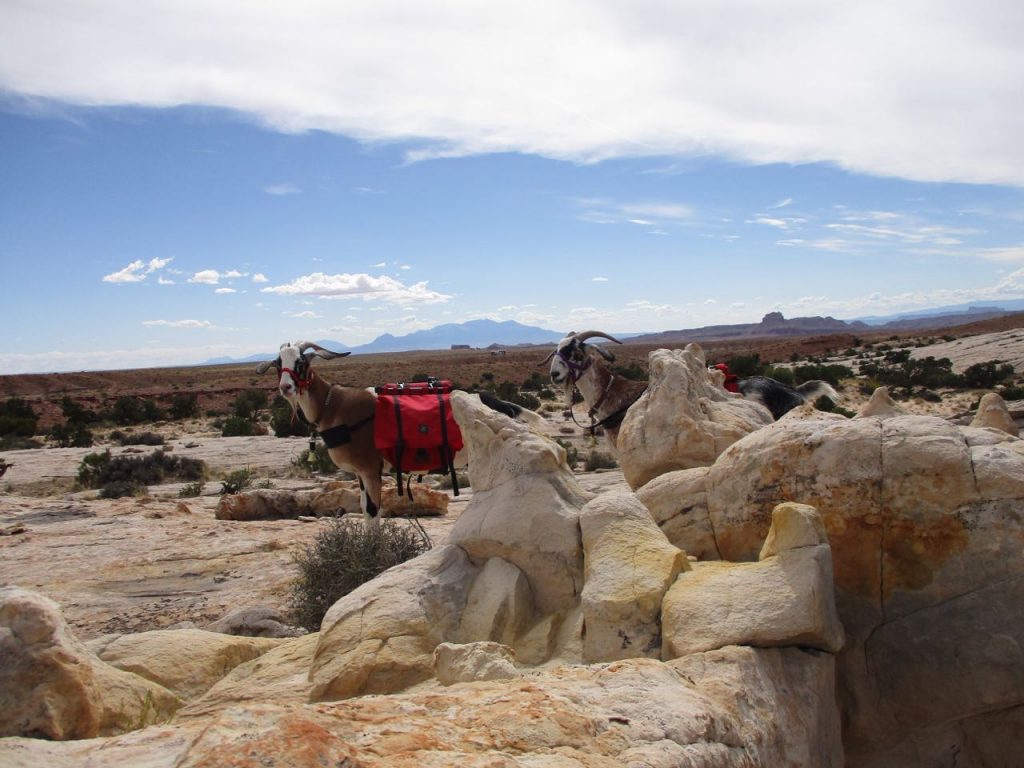 With a cool rock formation and an awesome dead tree, I hoped to get a lot more photos like this. It was the only one. 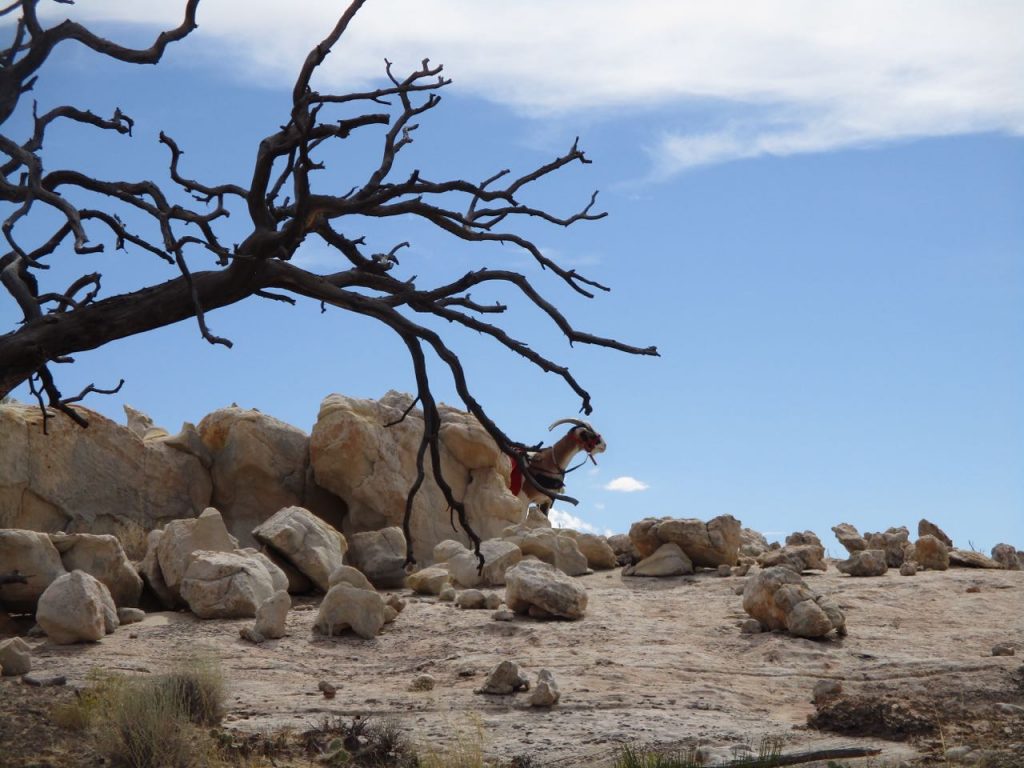 This one is ok… after I zoomed way in and cropped it. These goats wanted nothing to do with my little photo shoot! 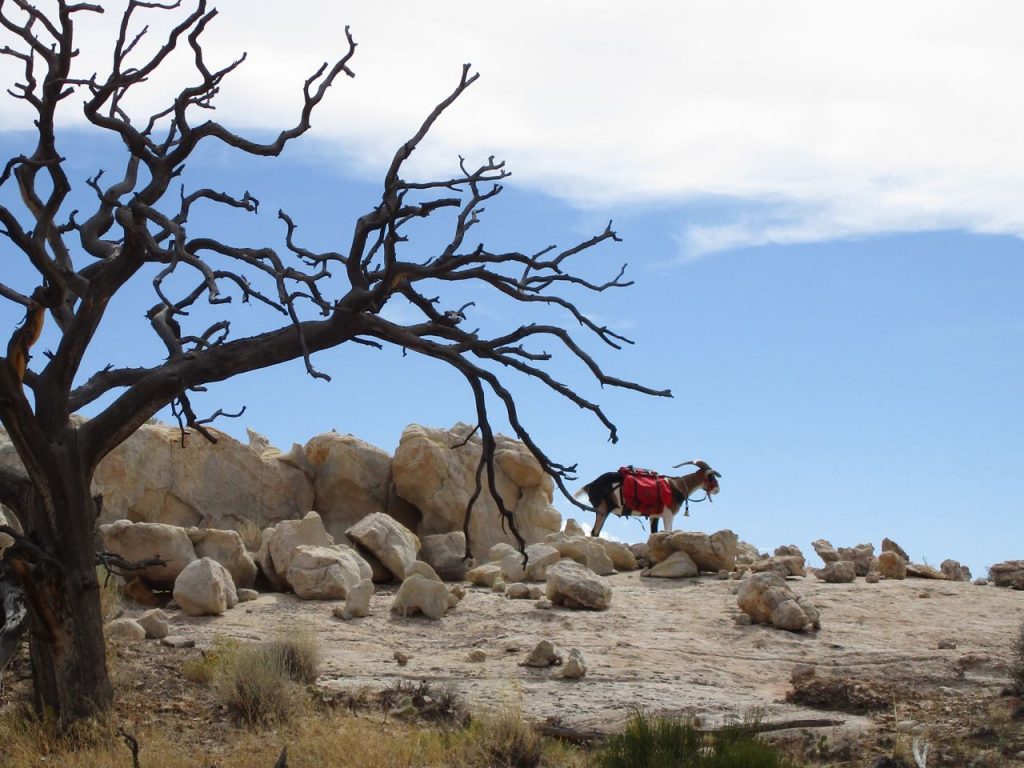 If I stayed close to the rock formation, the boys disappeared behind it so they could look for Phil. I had to climb way up the next ridge before they agreed to follow, and by then I was too far away to get decent photos. Little stinkers! 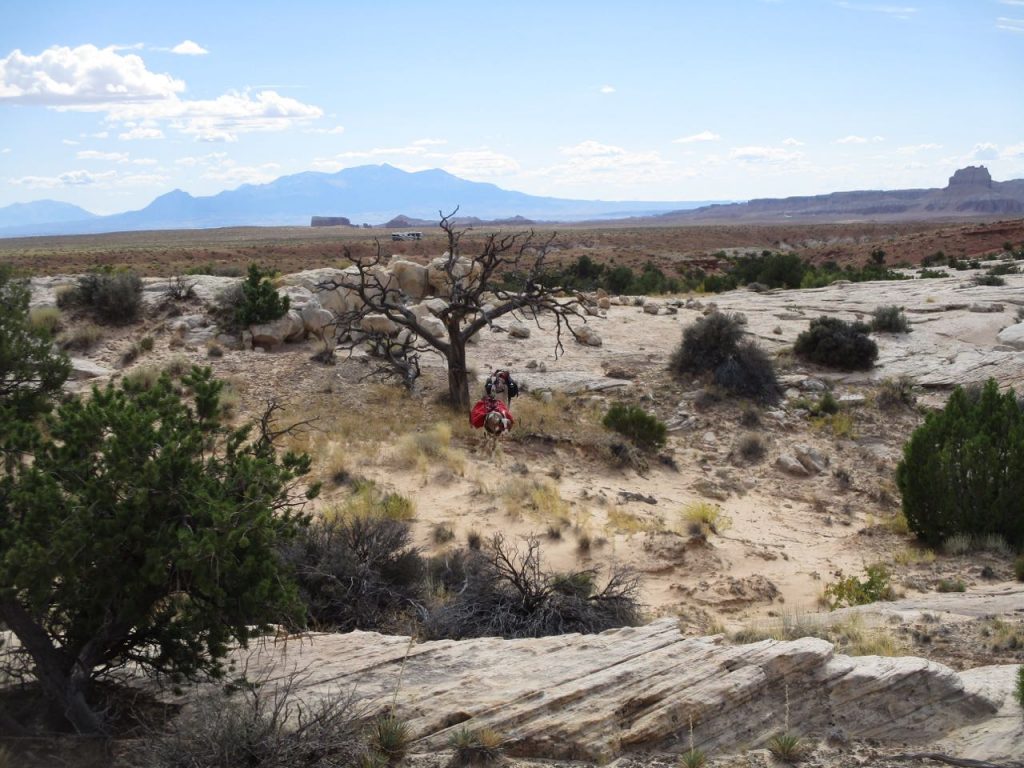 A little further on I found some other rock formations that were cool to photograph. These took a lot of effort. When Finn and Sputnik finally realized I was not going to follow Phil (and he was not going to follow us), they stuck to me like glue and wouldn’t stand far enough away for me to take pictures. I had to do a bit of shouting, dancing, stomping, waving my hands, and repeating the word “Whoa!” in a loud, commanding voice. It actually worked a couple of times! 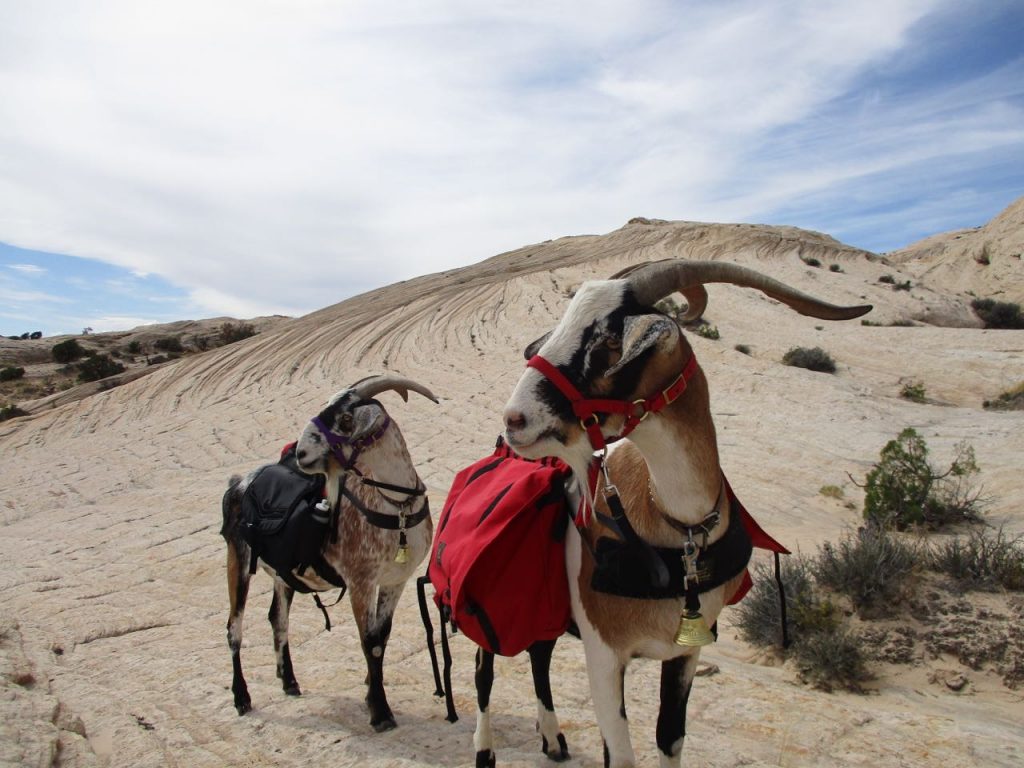 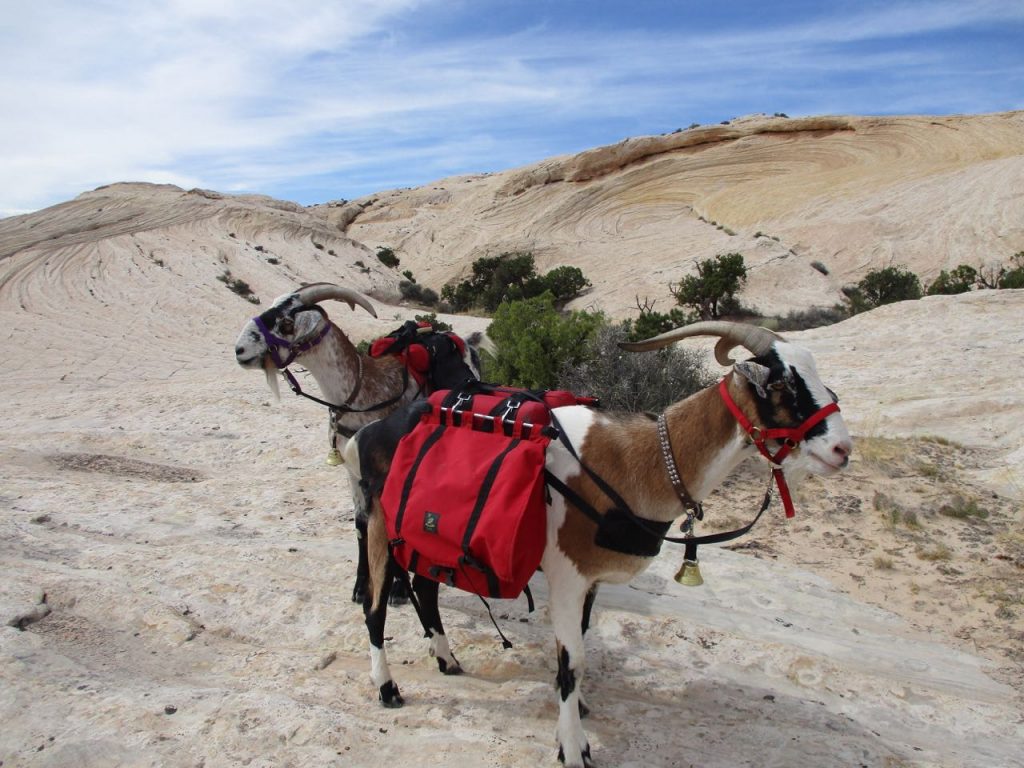 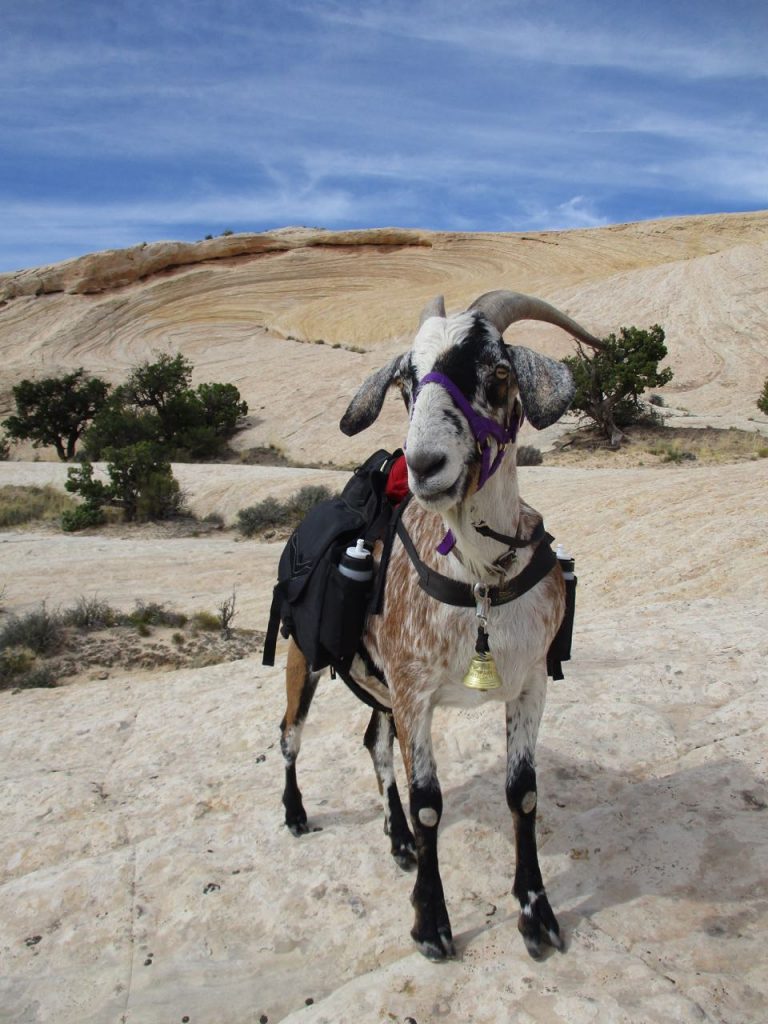 Once we finished the Window hike, most of our group decided to take it easy. But Herb, Phil, and I were still itching for adventure so we unpacked our goats and took them exploring up a small canyon behind our camp, then up and across the rock hillside. There was no trail so we encountered a few tricky spots where we weren’t sure if we could cross some of the deep cuts in the rock, but we always found a way and so made a nice loop up and around without having to backtrack. 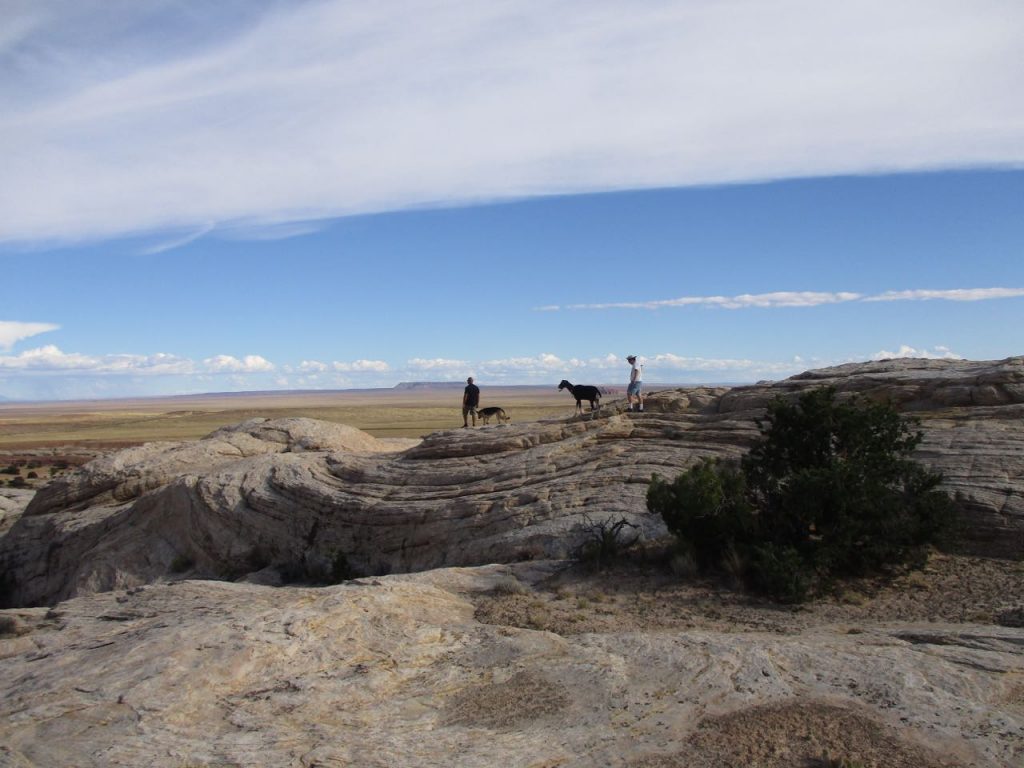 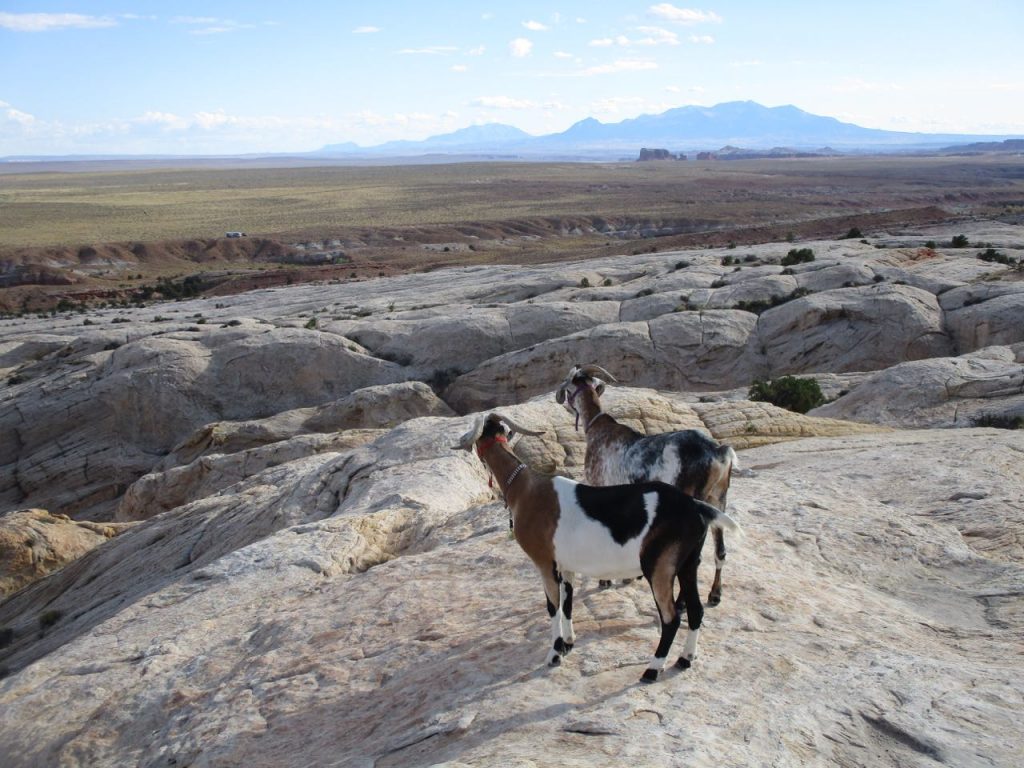 This poor fellow (or lady?–they can’t seem to decide!) looks a little worse for the wear. 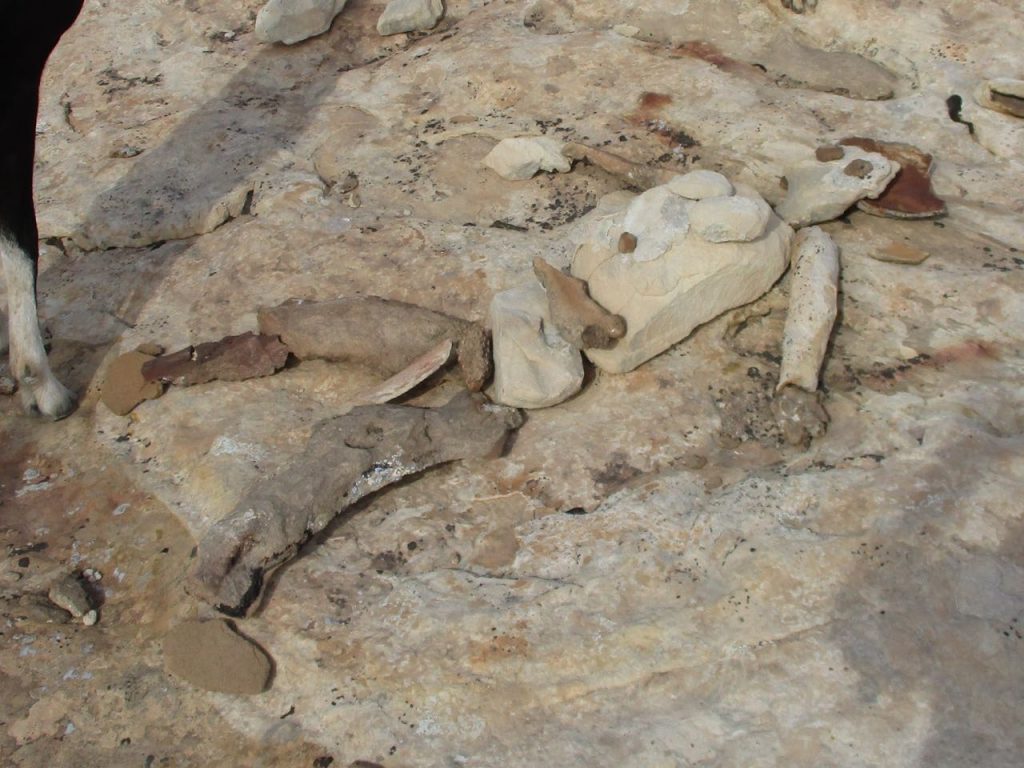 We encountered some steep terrain on this hike. If the camera weren’t tilted this would look even steeper! 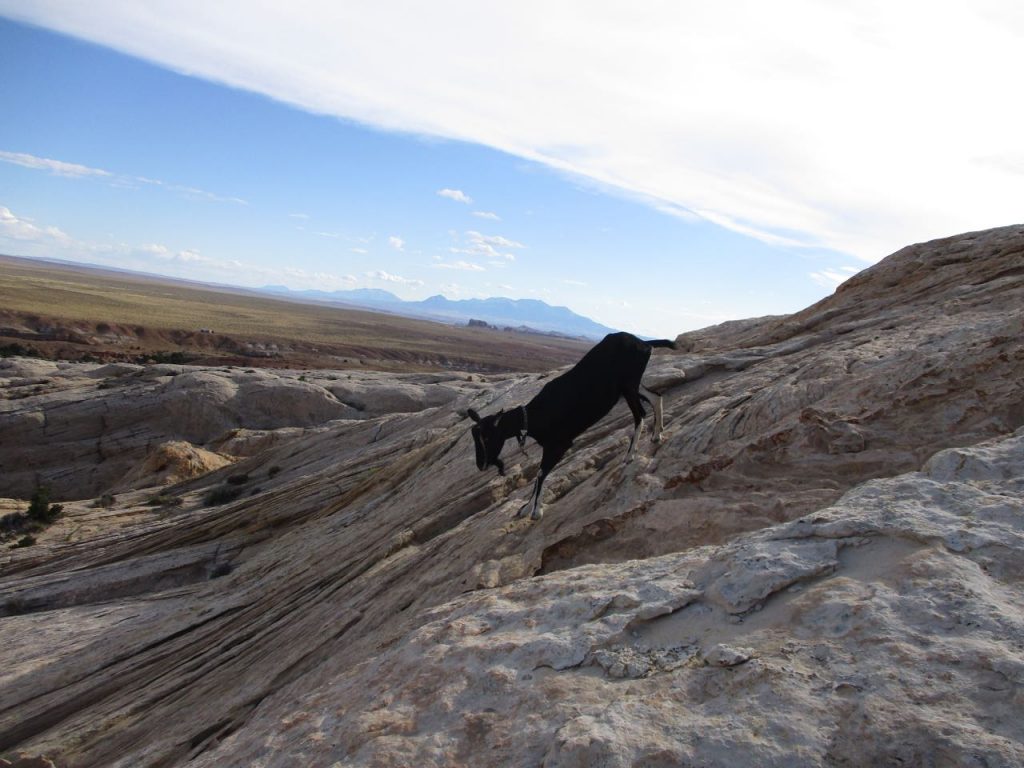 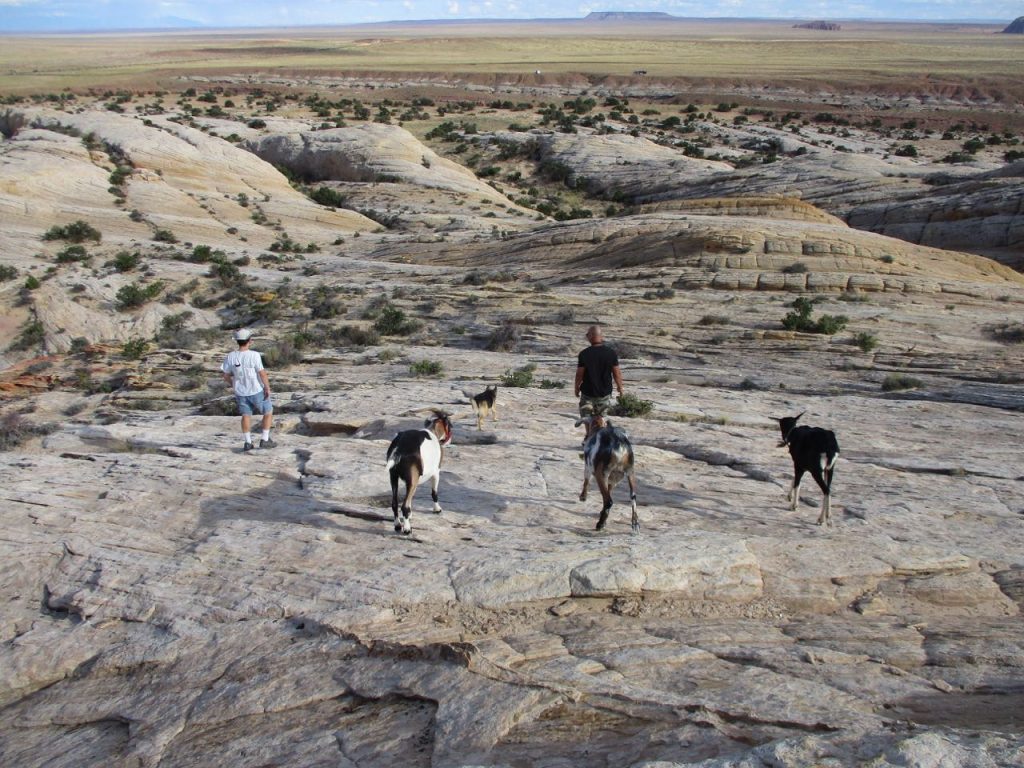 Herb brought a rock portrait that Connie had painted of Bacchus to hide. “Make sure there are no scorpions or mousetraps in that hole, Herb!” 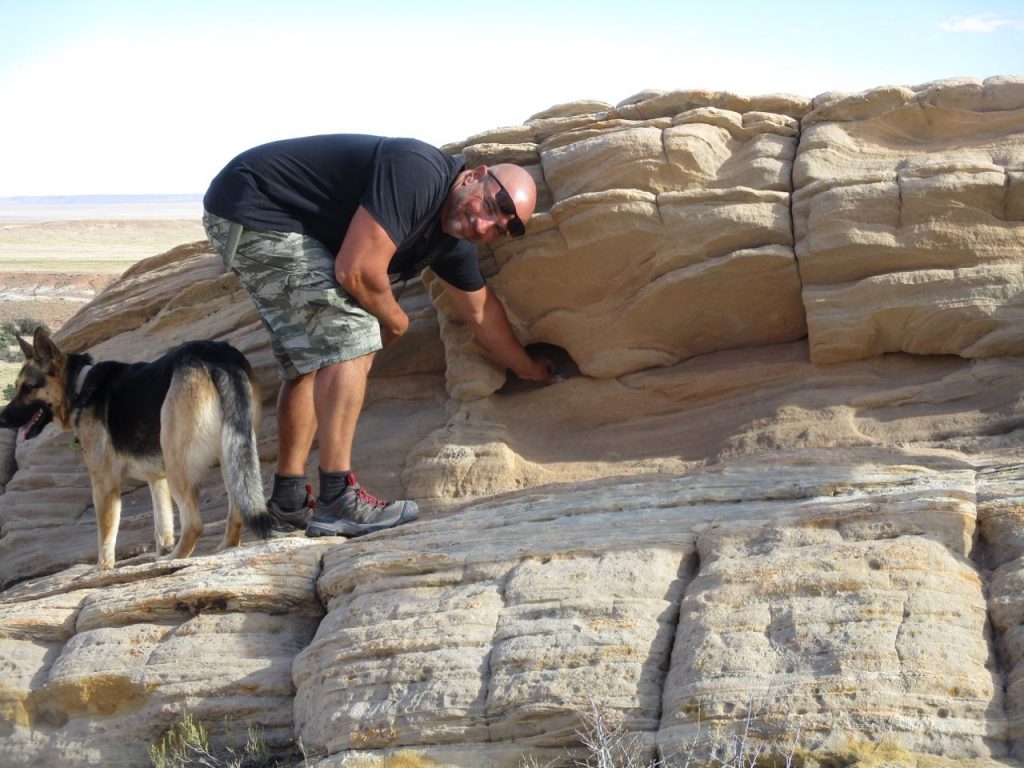 What a pretty portrait! 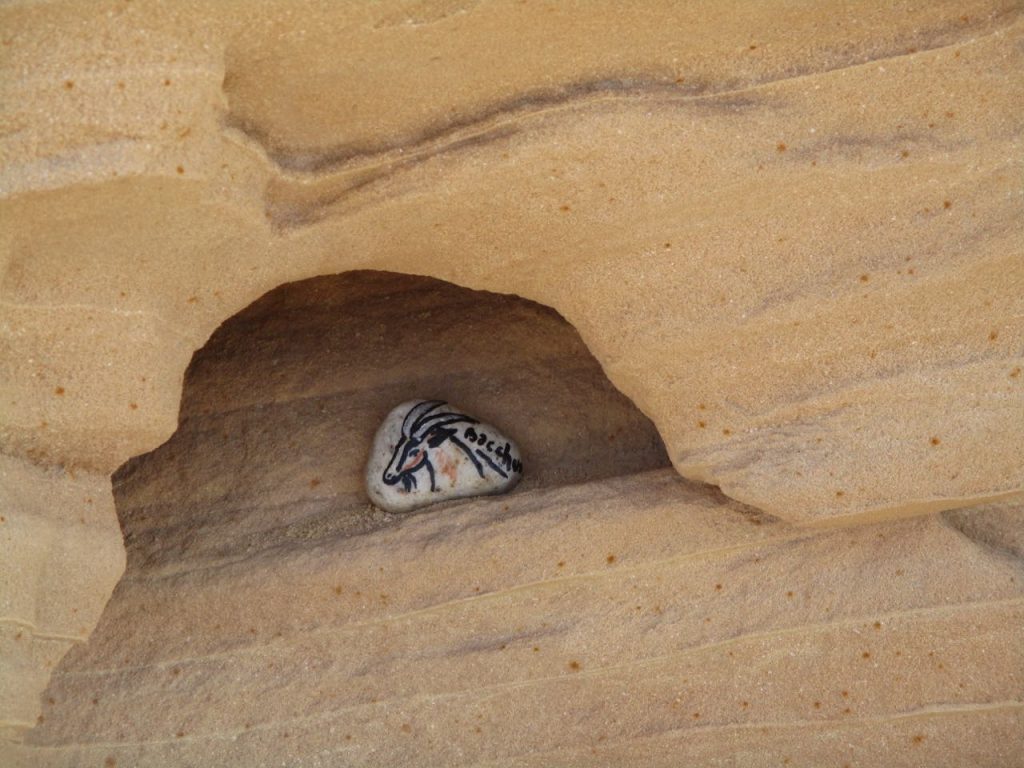 We had seen some neat-looking outcroppings of flashy red and bright yellow rock on our way up, but they were across a deep chasm or two so our goal was to find some way to get over or around the cracks so we could access those outcroppings. We eventually made it! Unfortunately the rock color didn’t come out so bright in the photos. 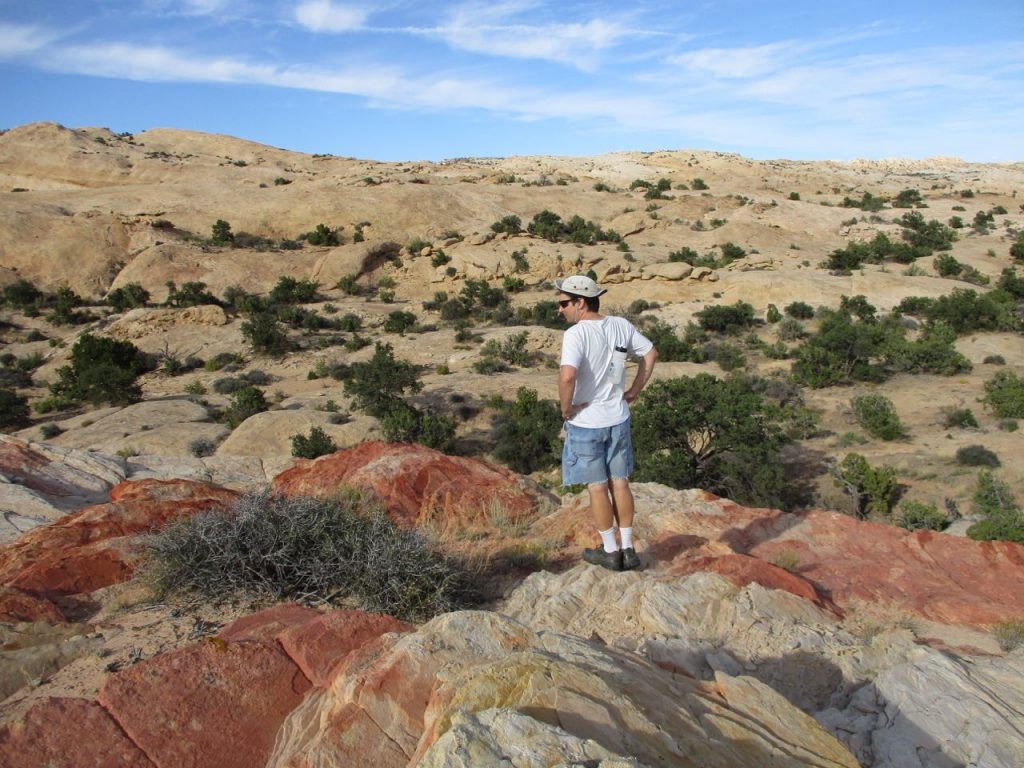 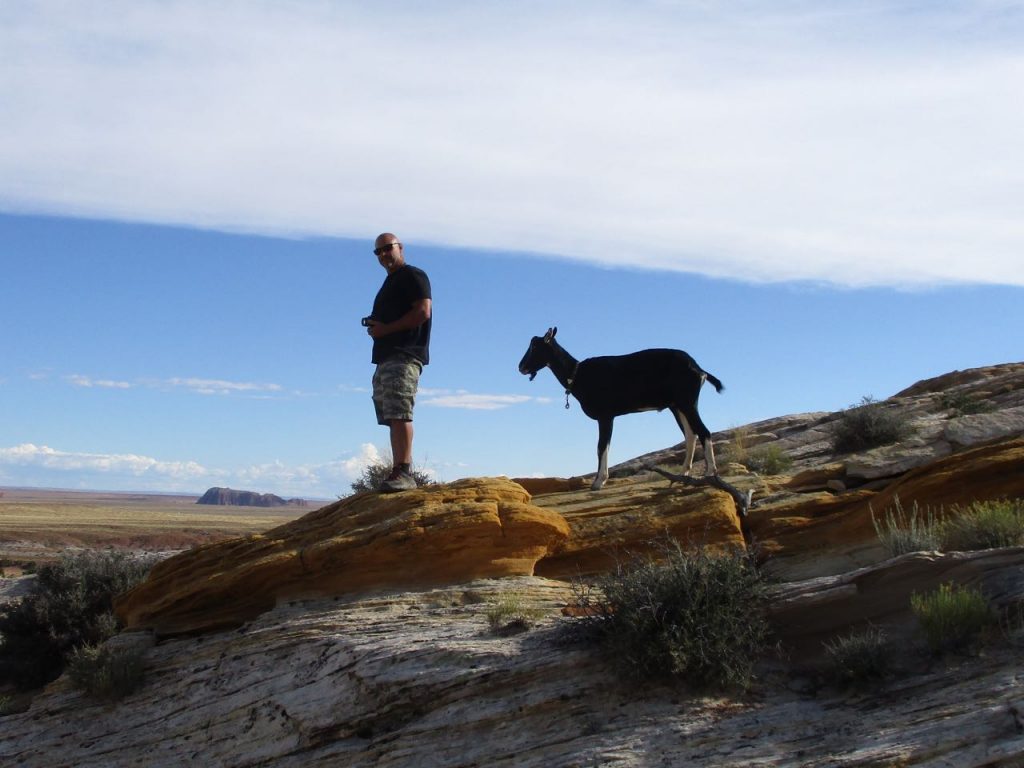 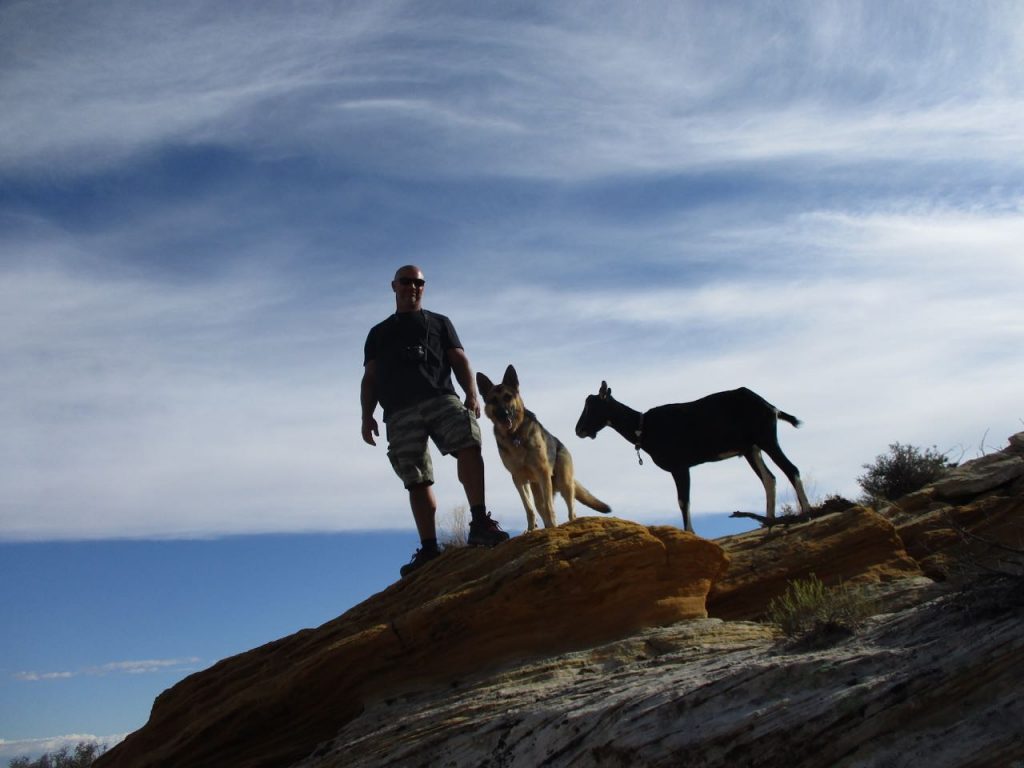 As always, I like to dress for the occasion. Fashion being my greatest passion in life, it is no surprise that I carefully selected this t-shirt to perfectly compliment the rock outcropping we used for this photo shoot. Expect to see me on the cover of every chic magazine in the check-out aisle at Walmart and your local grocery store. 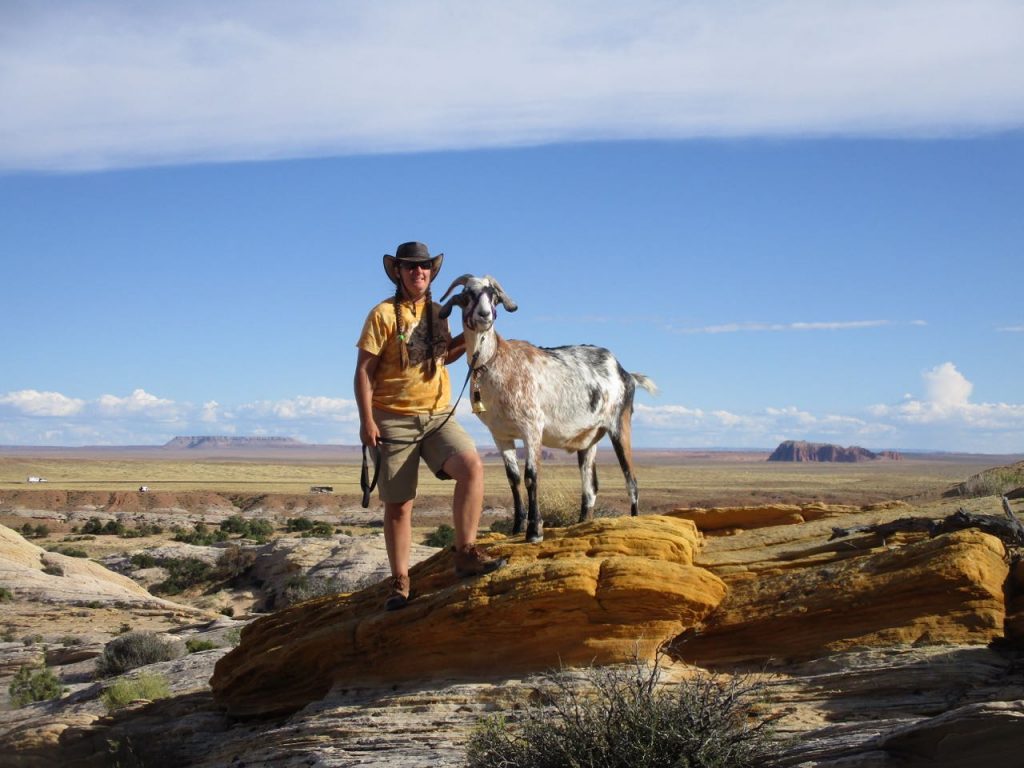 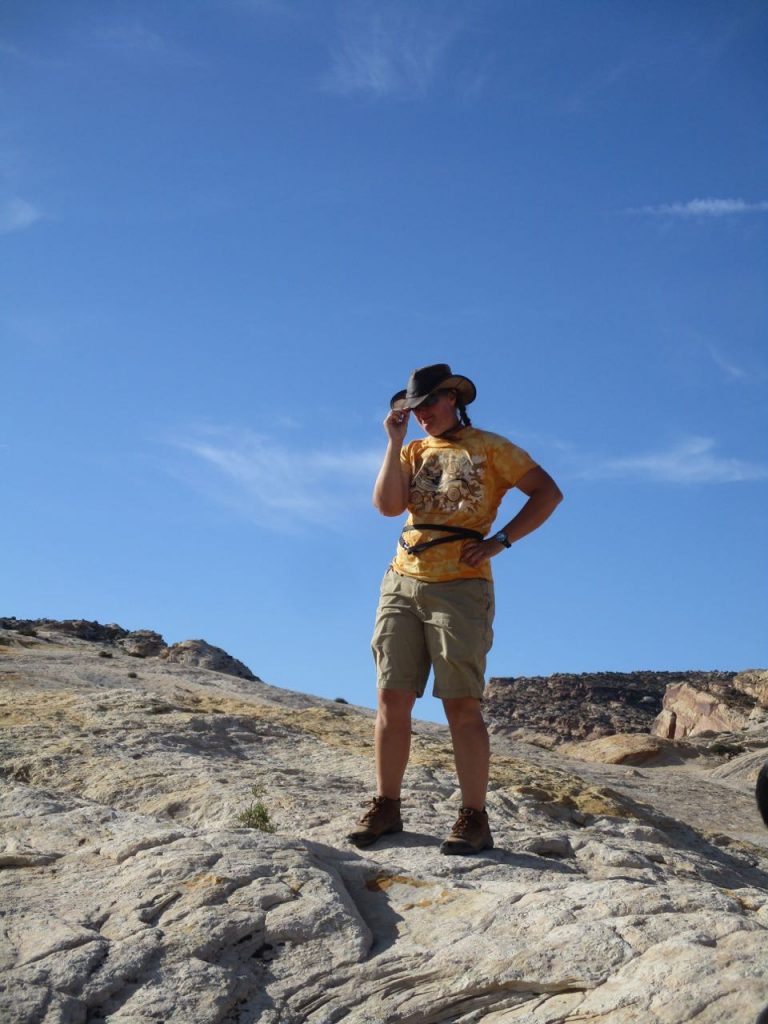