The first week of 2021 certainly proved exciting for me! In almost 42 years of life I’ve never once had to visit the emergency room, so this past Thursday night was a momentous occasion.

What happened was this: 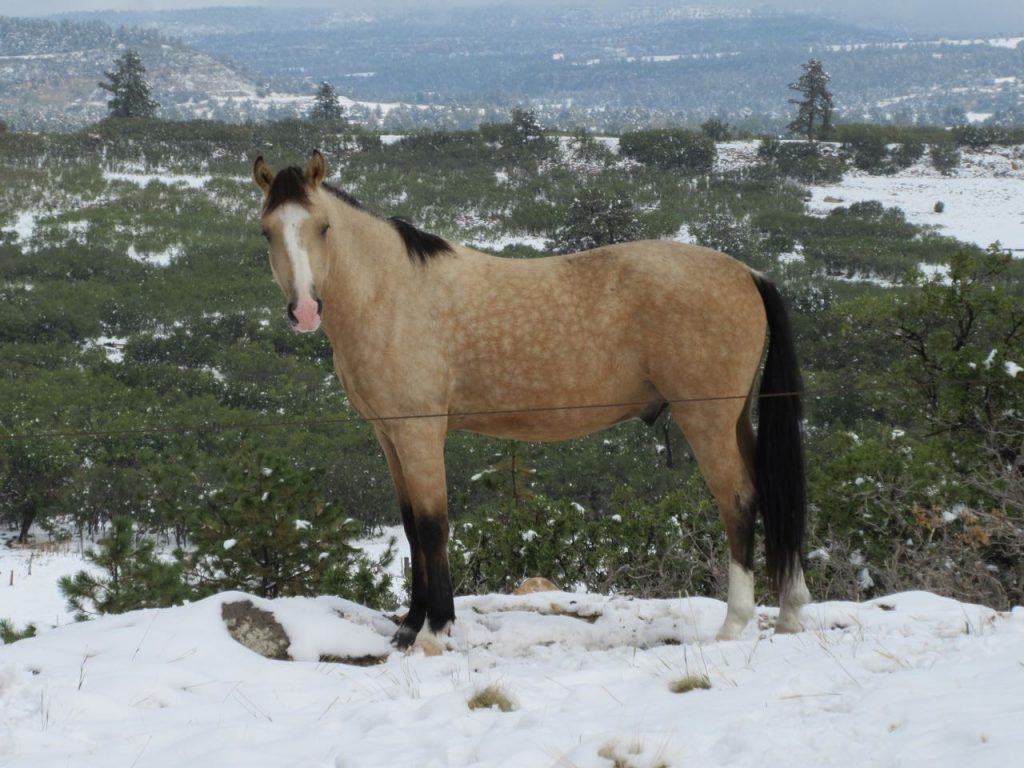 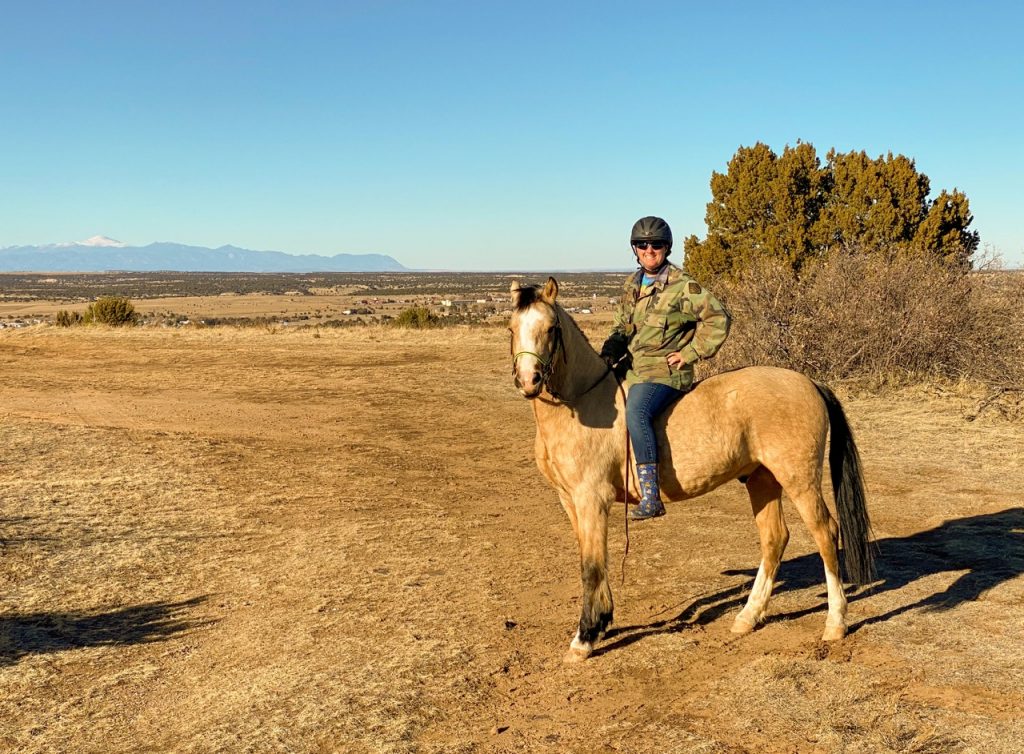 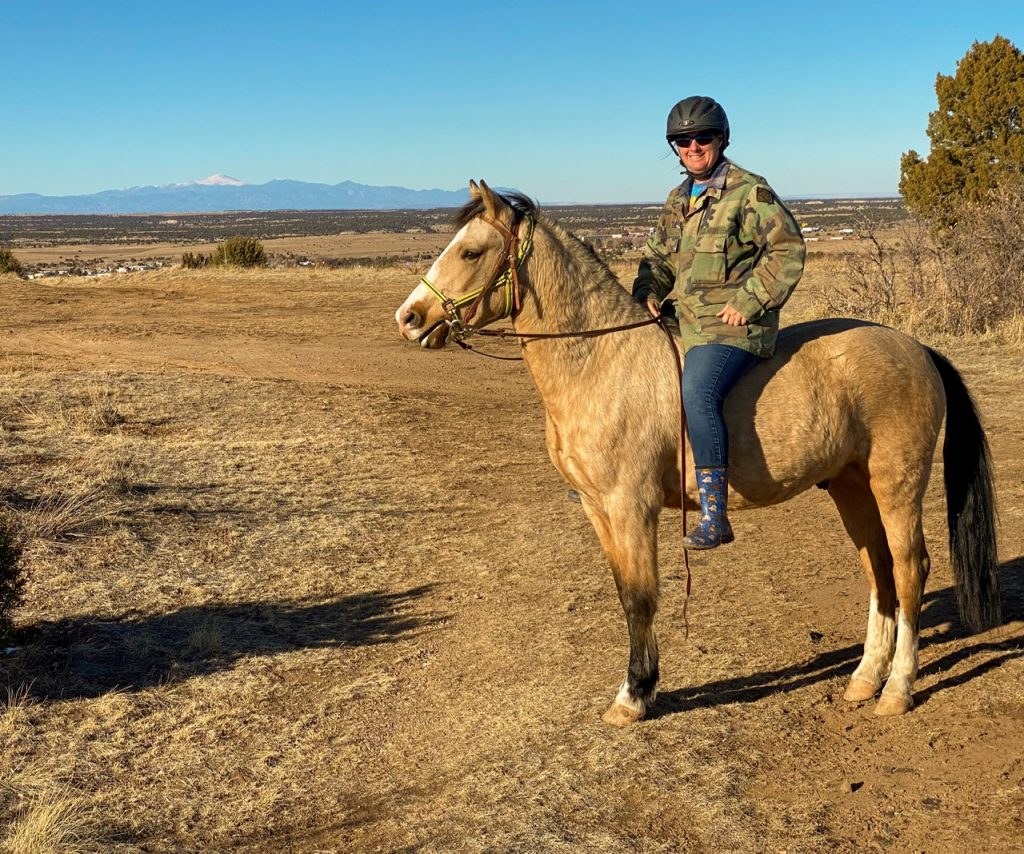 It was around 3:30 on Thursday and since I don’t feed until around 4:00 I thought I’d hop on for a quick jaunt. I have a long, sloped driveway and we were about 1/3 of the way down when Pepperjack started to trot. No big deal, but since he’s such a youngster he definitely has difficulty slowing down or stopping when he picks up speed on a downhill slope. I pulled back in hopes of slowing him before he got rolling too fast. Well, just at that moment my other horse Dusty, who was very angry to see us leave, took off with a tremendous, snow-flinging buck on the other side of the fence. It spooked Pepperjack and he bolted down the driveway. There wasn’t enough room to turn him in that narrow space between fences, and when I pulled on the reins, instead of gathering his weight onto his haunches, he just leaned on the bit for balance. Since I had no saddle and we were going downhill, every time I pulled on the reins I ended up pulling myself up toward Pepperjack’s neck, which threw his weight even further forward. Gripping tighter with my legs also made him run faster. It was a no-win situation. I was very worried about the patches of ice we had to cross. I didn’t move a muscle on the slick spots for fear of making him go down.

We were rapidly approaching the end of the driveway and I wasn’t sure what to do. If we went straight across the road we would hit the barbed wire fence. Our driveway has a bit of a left hook at the bottom so I figured our best bet would be to veer left and try to keep running up Clennin Road. If we could make the turn we’d have a level runway and even some slightly uphill road where we could recover our balance and hopefully stop. Also, Dusty wouldn’t be able to keep encouraging us to race because the bottom of our pasture has a lot of brush, rocks, and trees that would force her to slow down. I thought it was a good plan so I looked and leaned left in preparation for a sharp turn at high speed.

Problem was, Pepperjack didn’t get the memo. For one thing, he was on his right lead so he wasn’t really prepared for a sharp left turn. For another thing, there was a ditch of water at the bottom of our driveway which I think fixated his attention. Instead of turning, he kind of jolted in a straight line. It was too late for him to stop at the water, but it sure made him look and since by that time I was fully committed to a left-hand turn, I had no hope of staying with him. I flew off to the left and if I’d just let go I think it would have been an easy fall. I hit feet-first and rolled over, but unfortunately the accident didn’t end there. I was clutching my reins so tightly that I forgot to unclench my fists when I fell. Pepperjack kept running and I got dragged right underneath his flying hooves. My head and back got pummeled all over and unfortunately I got dragged primarily on my face like you see in the cartoons.

Pepperjack came to a screeching halt at the barbed wire fence about the same time that I remembered to let go of the reins. I was laying in the ditch on the opposite side of the road from where I’d fallen and I nervously took inventory. I felt pretty banged up–especially my head (thank goodness I was wearing my helmet!)–but I was alive, I was conscious, and nothing seemed to be broken. In fact, once I got up I was surprised to discover that I wasn’t seriously hurt at all except possibly my face. I was bleeding rather profusely from my left eye. When I forced it open I could still see but my vision was blurry (probably from all the blood I assured myself). I caught Pepperjack, who was standing next to me looking even more shaken up than I was. I believe both of us were thinking, “What the heck just happened?” I led him back to our driveway, scooped up a handful of snow, and plastered it over my bleeding face. The snow turned red almost instantly and I had to get a fresh scoop. In fact, I had to get several fresh scoops before the bleeding subsided.

I didn’t want this experience to be the one we ended with, and since I wasn’t seriously injured I hopped back on Pepperjack and we walked up the road a ways. He was a little rattled, but going on about our original business as though nothing interesting had just happened seemed to calm him down pretty quickly. I knew I needed to get home though. My left eye was rapidly swelling shut and there was still blood dripping from the corner. I rode back to the bottom of our driveway then got off so as to avoid another mad rush if Dusty tried to race again. Besides, I needed more snow. My face was numb by the time I got back to the house and the bleeding had slowed to a trickle. I put Pepperjack away and got the goats into their pens. I knew Phil would be off work about this time and we could head into Pueblo as soon as everyone was fed.

I took off my helmet and it was cracked across the back. I guess I’ll be needing a new one! It’s always sobering when you look at your broken helmet and realize that could have been your skull. I’ve had that experience more than once and I almost never throw a leg over a horse without a helmet any more. When I finally looked at myself in a mirror I was both worried and relieved. The blood was coming from a deep split at the outside corner of my eye, but the eye itself looked ok. My vision was still blurry on that side but the eye appeared undamaged. I suspected I might have broken my eye socket (a suspicion that later proved true), and I was also concerned that I might have swelling and/or bleeding in my brain. I grabbed a bag of frozen corn and a cold, wet washcloth. I went upstairs to get Phil who was still in a meeting with one of his coworkers. He looked at me and when I took the bag of corn off my face he turned white as a sheet, stammered something unintelligible to his coworker, and switched off the computer. He wanted to call an ambulance but that was out of the question. It looked nasty, and yes we needed to get it checked out, but there was no huge rush. I had both ridden and walked away from this accident and I was still alive half an hour later. We did chores and headed off to the hospital where they did a CT scan and confirmed that there was nothing seriously amiss. The doctor stitched the split next to my eye and prescribed antibiotics to prevent a sinus infection from the broken eye socket.

When they asked me, on a scale of 1-10, what my pain level was, I was pleasantly surprised to be able to honestly reply that it was only a 2 or 3. It really wasn’t too painful–nothing compared to the pain when I tripped over a rock on Thanksgiving Day and landed thigh-first on a tree root. That was more like an 8, and I still have a large, hard, numb knot on my thigh from that accident. Nevertheless, a nurse started dispensing pills into a little cup and she said, “I’m going to give you some drugs for the pain.” When I asked what drugs, she replied, “Tylenol and hydrocodone.”

Hydrocodone!! Seriously?!? I had just told her that my pain level was 2 or 3–not 12!! I declined the medication. Tylenol does nothing for me and I don’t care to find out what hydrocodone does. Besides, who wants to pay hospital prices for pain meds? I had Aspirin and Ibuprofen at home and I could wait that long.

So I have a beautiful shiner that will provide a nice conversation piece for the next week or two. 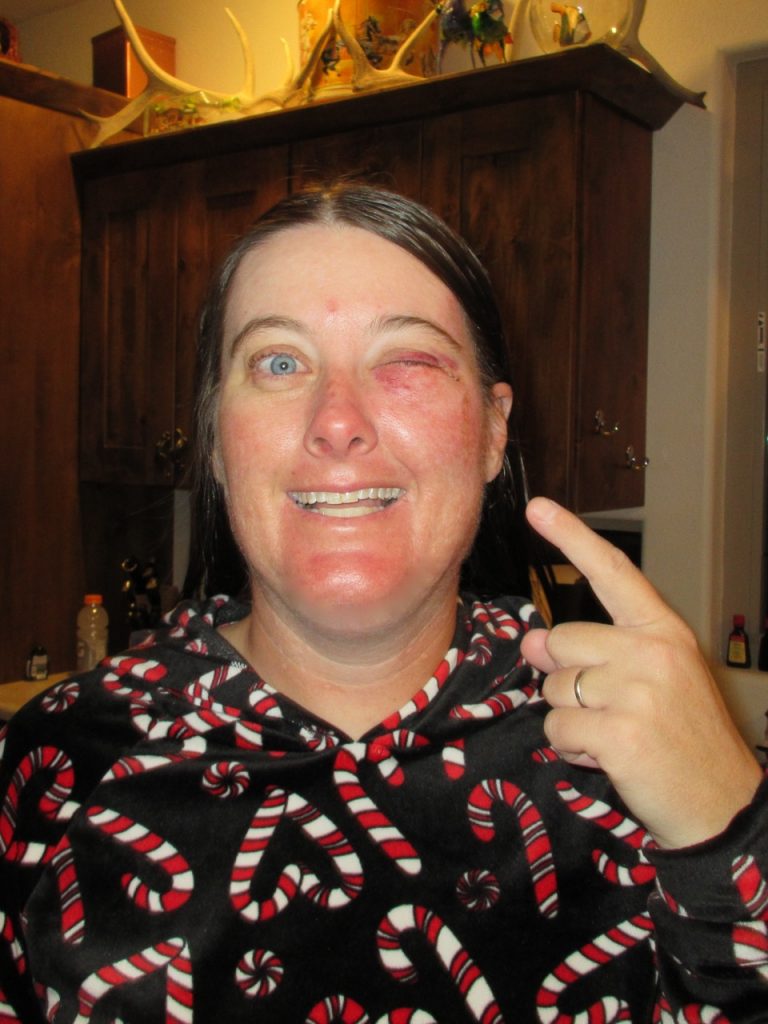 However, in order to avoid grossing people out, I have adopted a pirate patch for those times when I venture out in public. Yaaarrrr!! 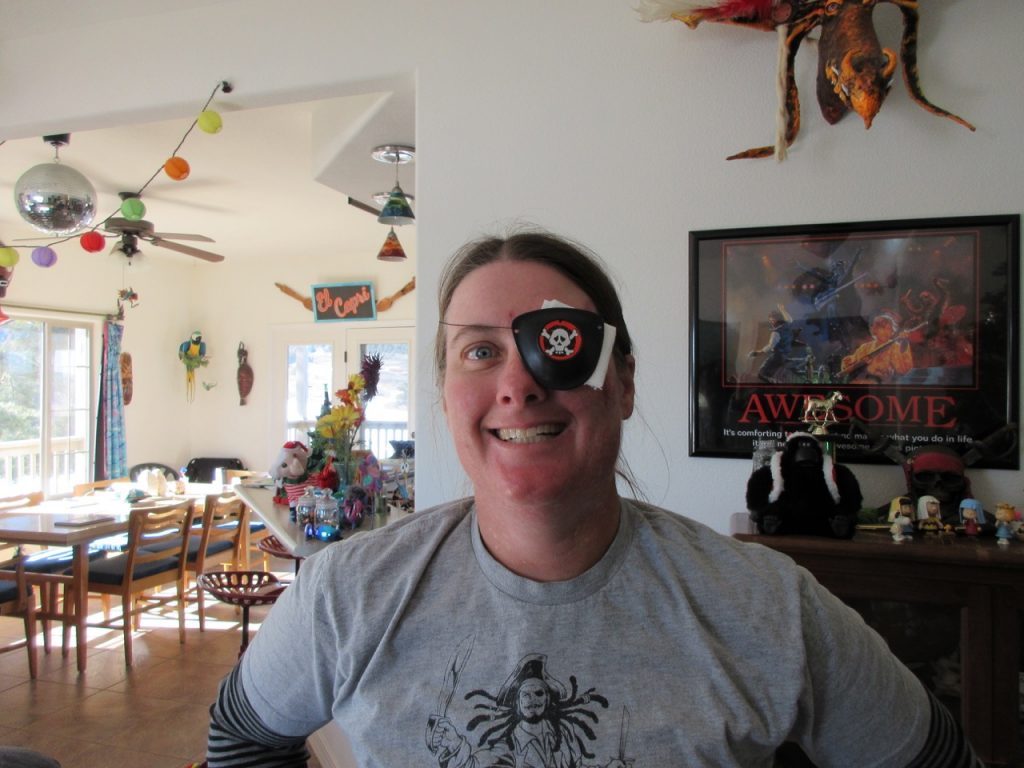 Last night it felt appropriate to watch this movie: 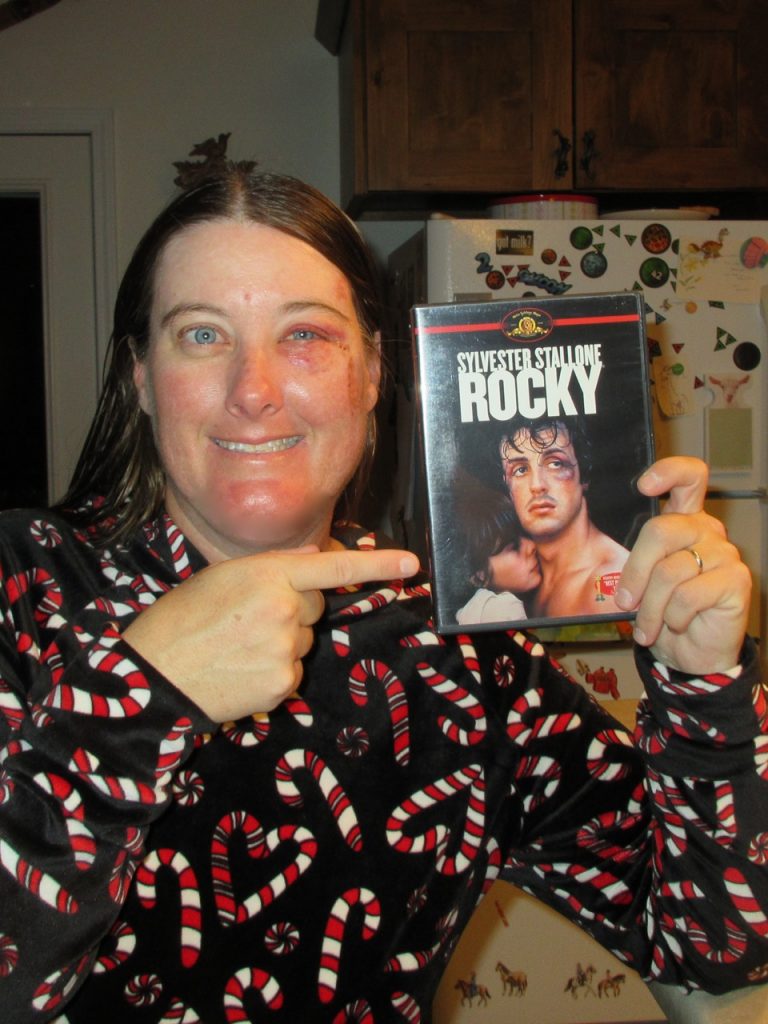 After watching Rocky I decided I’m really glad that 1.) I did not break my nose, 2.) I do not wreck my face for a living, and 3.) No one had to slit my eyelid open with a razor blade!