We spent a very nice night in the B & B where we were very happy to be able to shower after three days of camping in San Rafael. But it was only one night because the B & B was booked on Saturday, so Phil and I took the opportunity to go on our first overnight goat packing trip together! I’d picked a very easy and straightforward trip for our first overnight–just something to dip our toes in. Clark, our host at the B & B, had offered to drop us off at the Escalante River trailhead about 15 miles outside of town. He would then drive our truck back to the B & B and park it there while we followed the river trail back to town. It was the perfect overnight hike with water all along the way, an excellent camping spot at the halfway mark, a clear and well-traveled trail, nice natural formations and Indian artifacts to see along the way, and almost no elevation changes. The weather was slated to be perfect. I was excited to embark on my first “real” goat packing experience with Phil, even if it was going to be a super easy one.

It was probably the ease and obviousness of the hike that put me off my guard. Phil and I had explored both ends of this trail on previous trips but had never hiked it through. I had read a trail description three weeks earlier when planning the trip, but the Swell vacation kind of obstructed my view of all that was to come after so I didn’t prepare. At the time I thought, “It’ll be fine… I’ll review the trail the night before at the B & B, I’ll ask Catherine (our hostess) for some details, and we can always pick up a trail map at the BLM office when we get our overnight camping permit.”

Phil had gone by himself to get the permit while I packed our panniers and I had forgotten to mention getting a map and trail description. Catherine is a wealth of excellent information about all the trails in the area, but she had a full house that morning and there was no time for me to ask questions over a leisurely breakfast like we usually do. Nonetheless, I was brimming with confidence as I struck off down the trail–in exactly the wrong direction. Phil expressed his doubts. The woman at the BLM office had mentioned something about hiking the trail upstream, which sounded familiar to the trail description I had read too. But the description had also mentioned going under the highway bridge and seeing the ruins of an Indian granary up on the cliff. We’d crossed under the bridge and there was the granary, so surely we were going the right way! Maybe the stream was going the wrong way? Phil and I argued back and forth a little bit until I said, “Well, better safe than sorry.” So we turned back toward the parking lot to look for a signpost. Good thing we did!

The sign was on the opposite side of the parking lot from where we’d unloaded so we hadn’t even seen it. I love Lake Powell, but I didn’t bring my water skis on this trip! 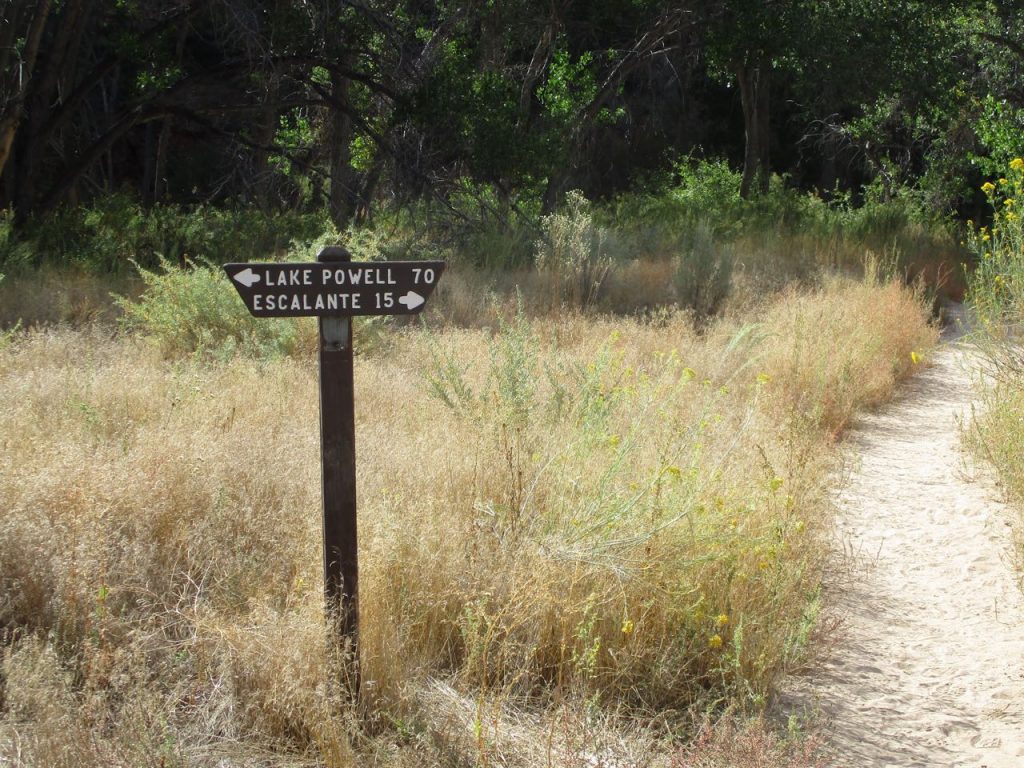 Phil found an amusing slogan written on the bridge. If you don’t get the reference, read this and be sure to watch the “Body Massage” video linked there. 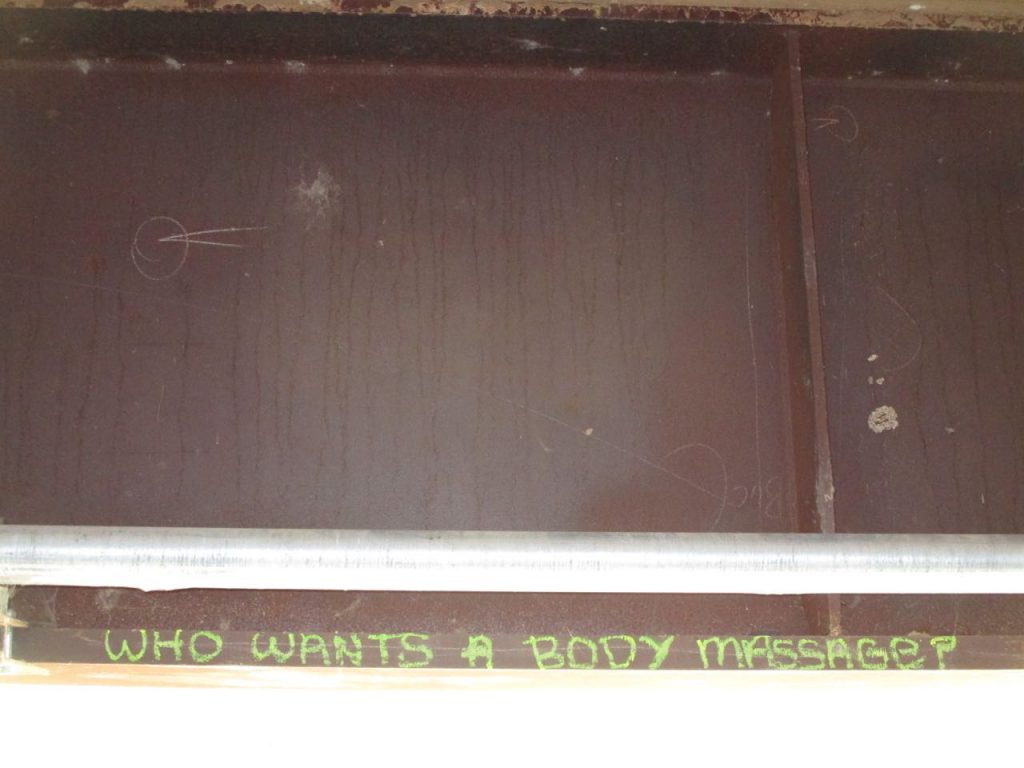 Once we got going the trail looked very familiar. We had been here in 2012 with Cuzco and Nibbles on our first trip to Escalante. We had crossed under the bridge to view the Indian ruin on that trip too but had been advised to turn back and explore upstream, which was the essential part of the trail description I had forgotten. We crossed the creek many times. Finn and Sputnik were reluctant to get their feet wet at first. It had been a long time since they’d had to cross water, but it quickly became routine on this trip. 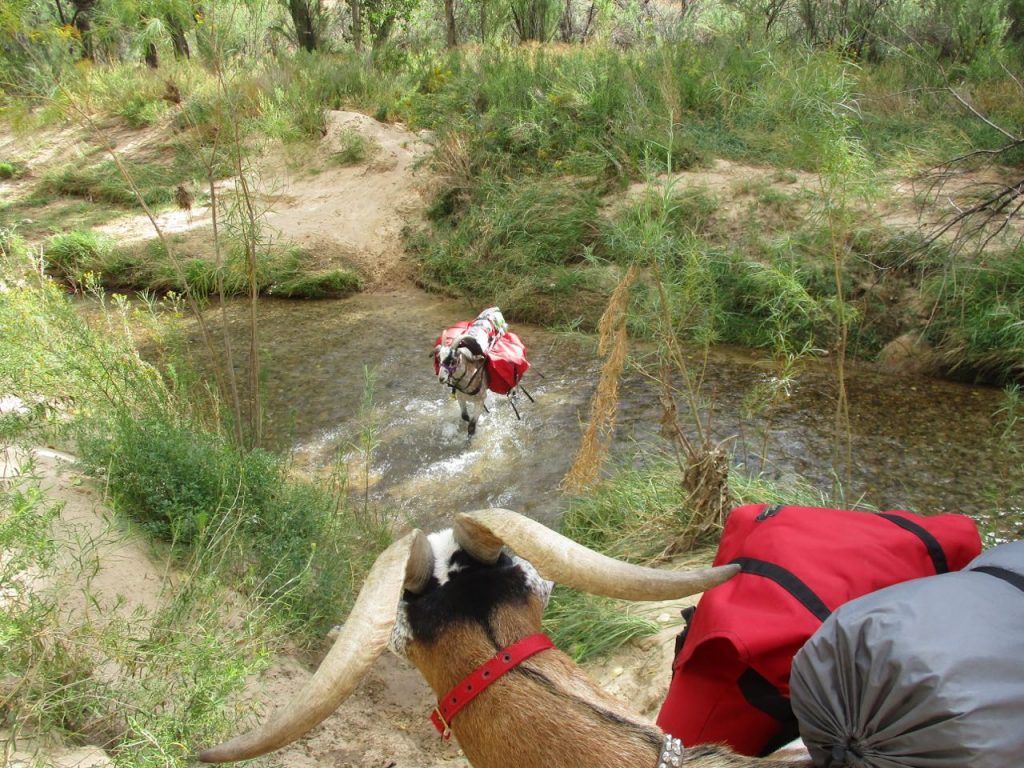 I loved this huge boulder with the crack down the middle, but I couldn’t persuade either of the goats to share my interest. 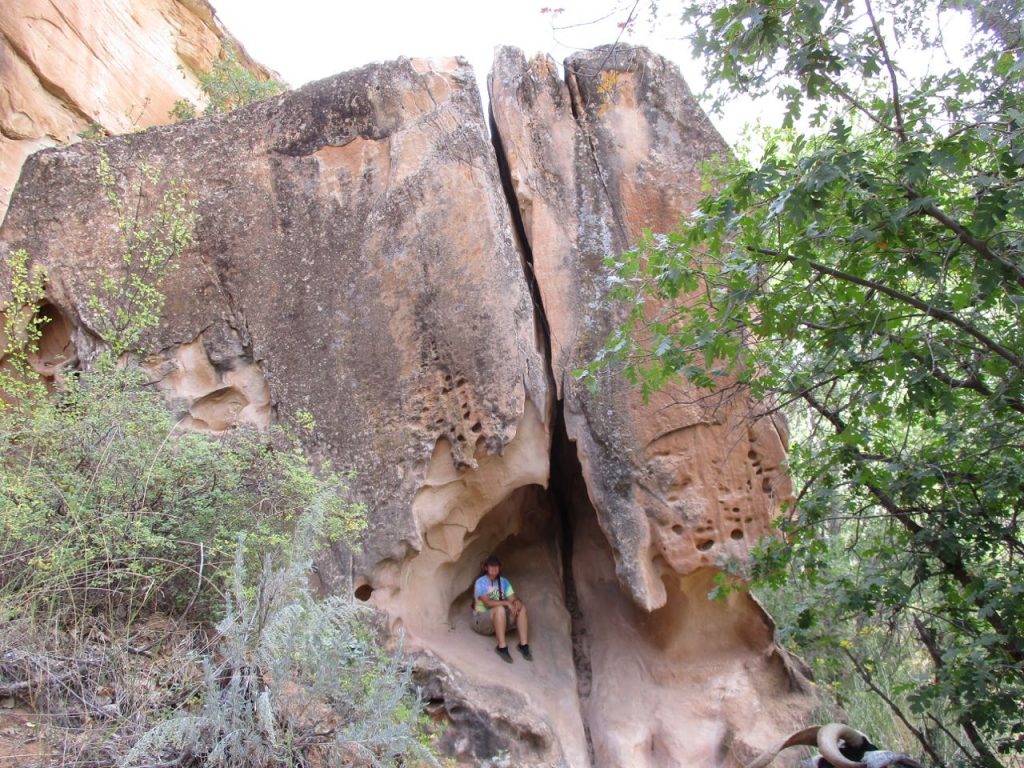 It’s difficult to see because it blends into the rock, but there is a huge natural bridge here. It looks like the entrance to a giant’s castle. 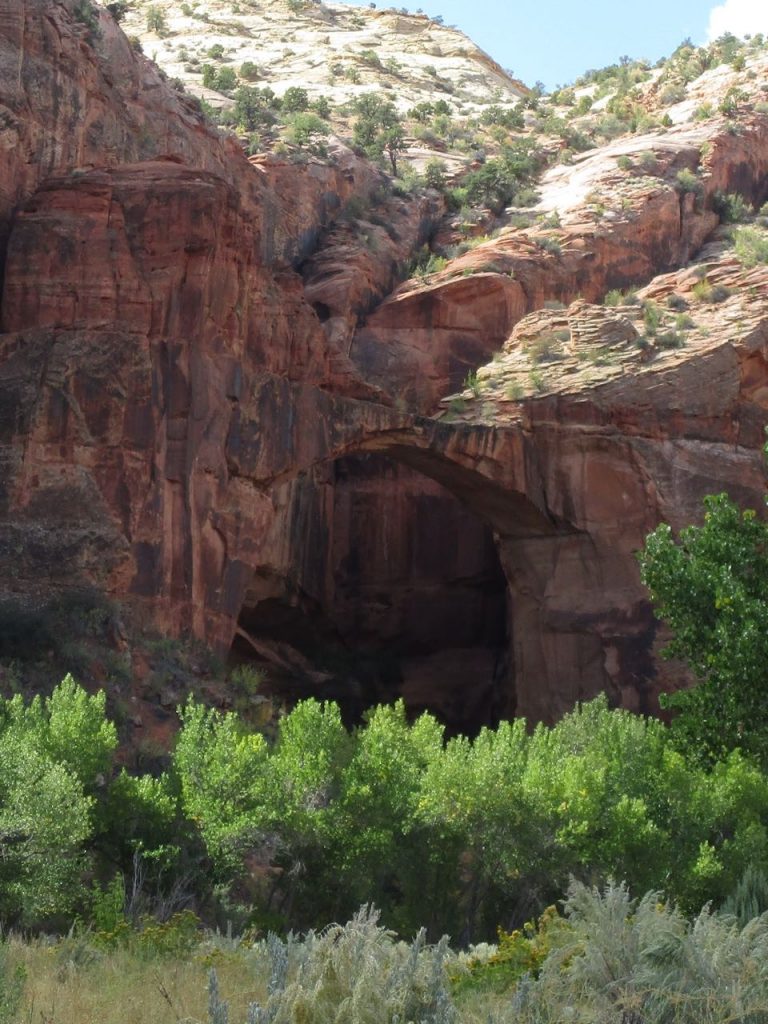 This is the view from beneath the bridge. It sits very close to the rock wall behind it. 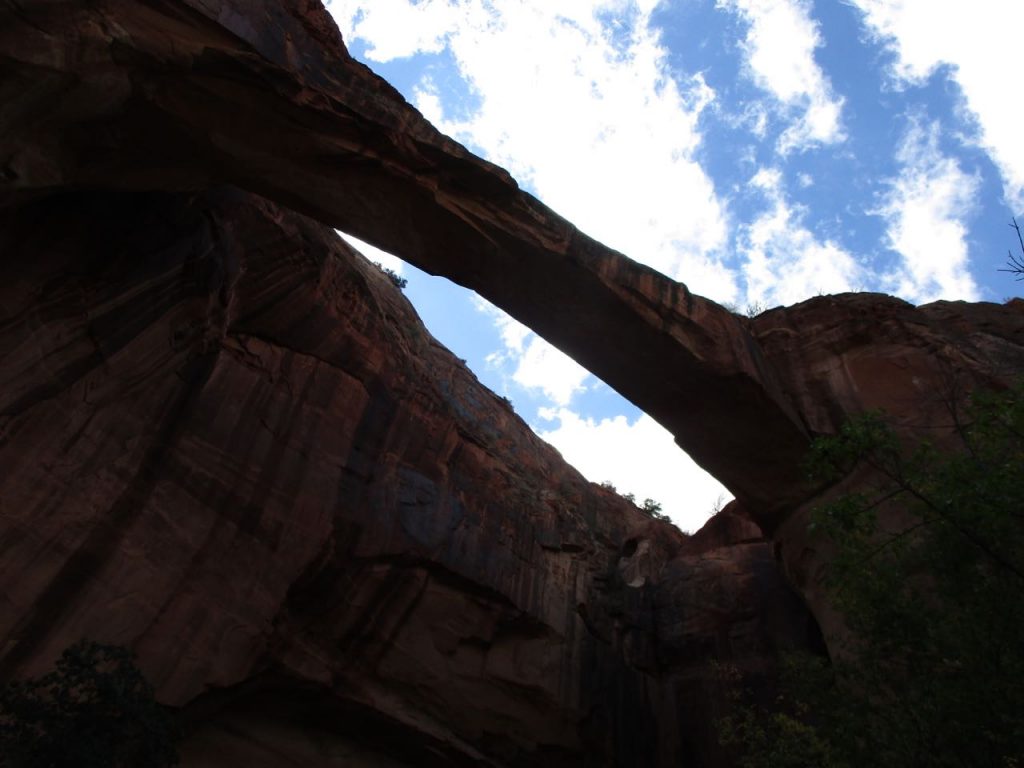 There was a small jug handle type arch further on. 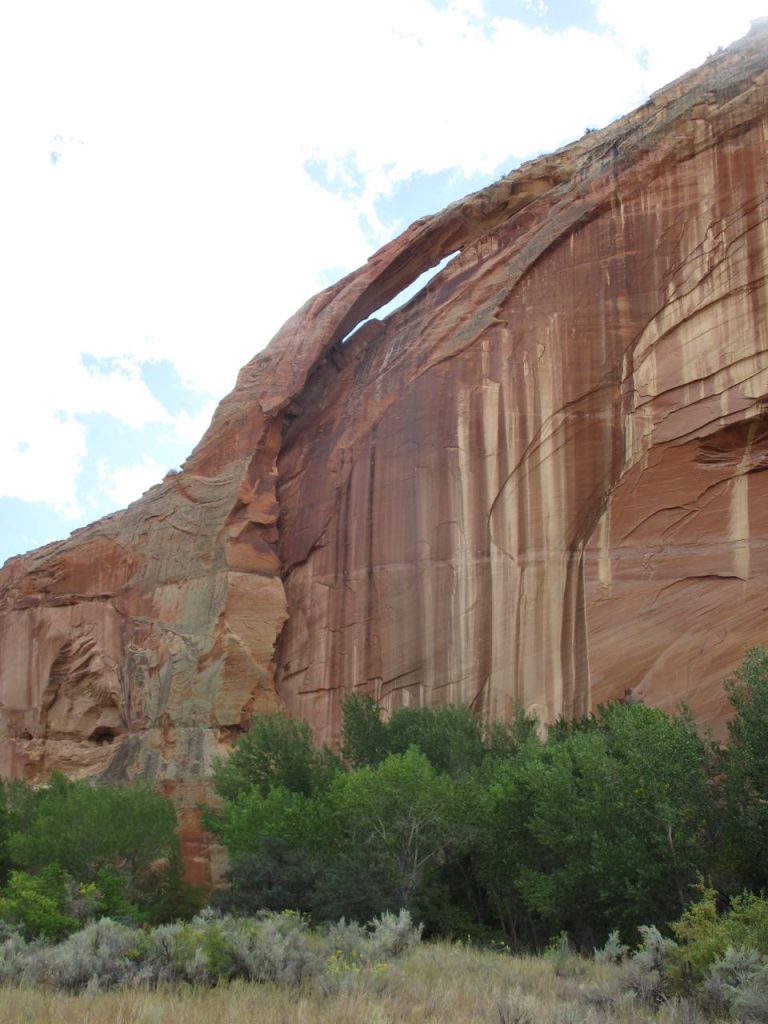 The varnish on the cliff walls was amazing. 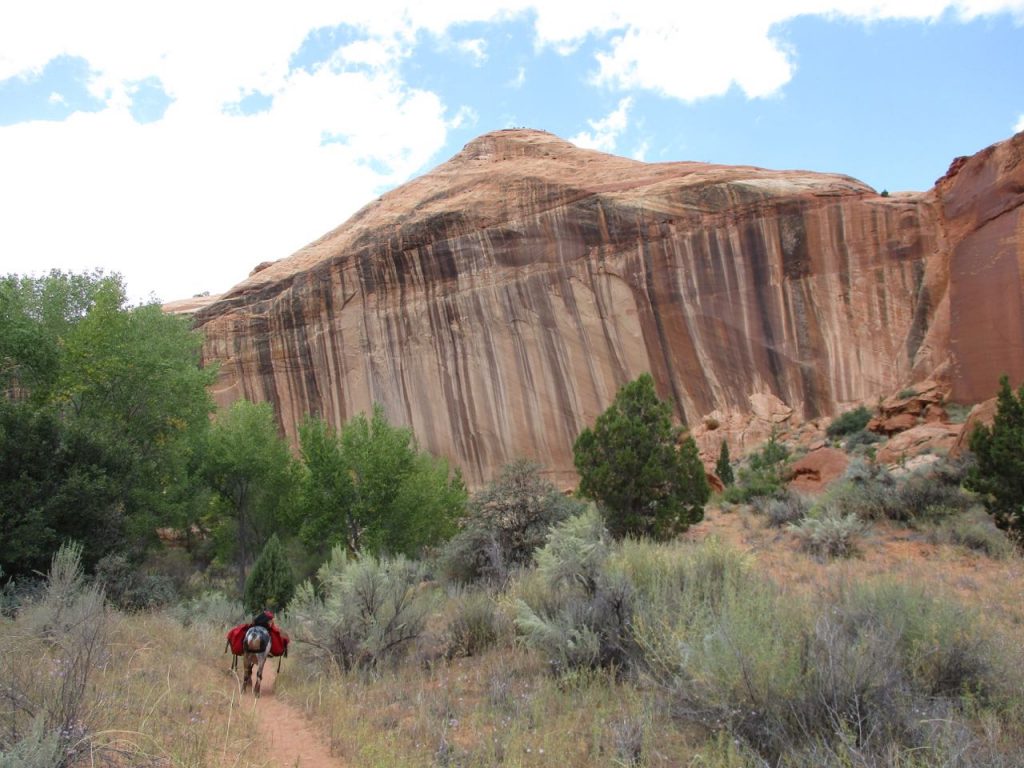 The trail was often difficult to walk on. The sand was deep and lined with stickers. Phil had a particularly hard time with stickers getting under his sandal straps and we kept having to stop so he could remove them. We found it was generally easier to just walk up the river. 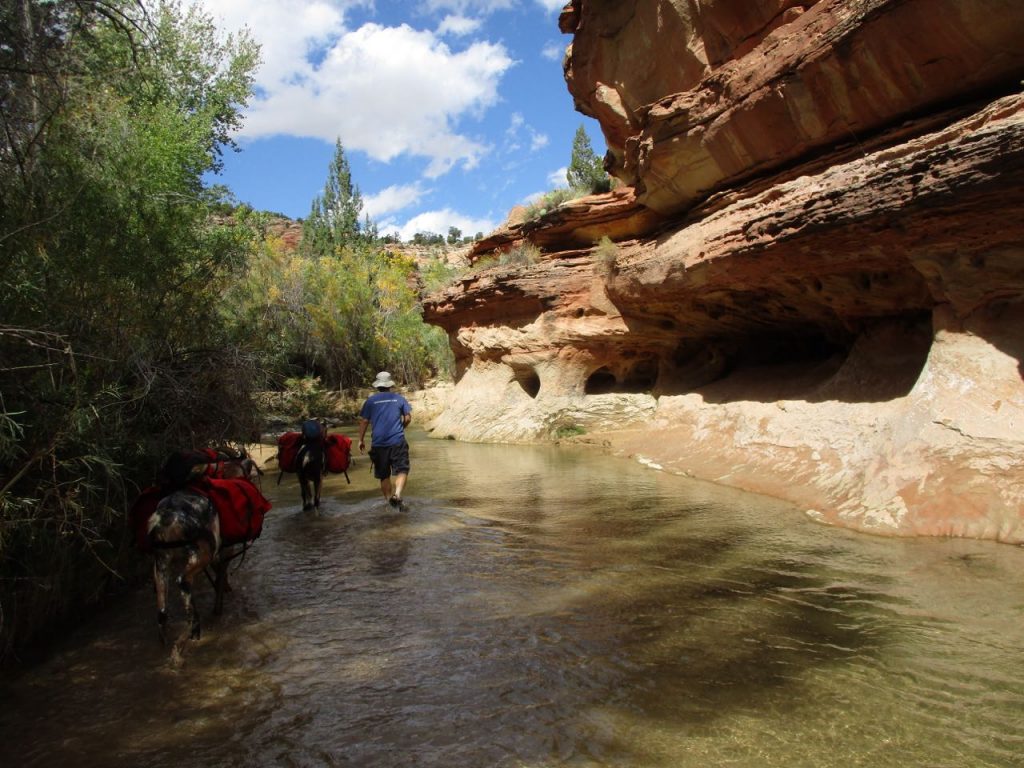 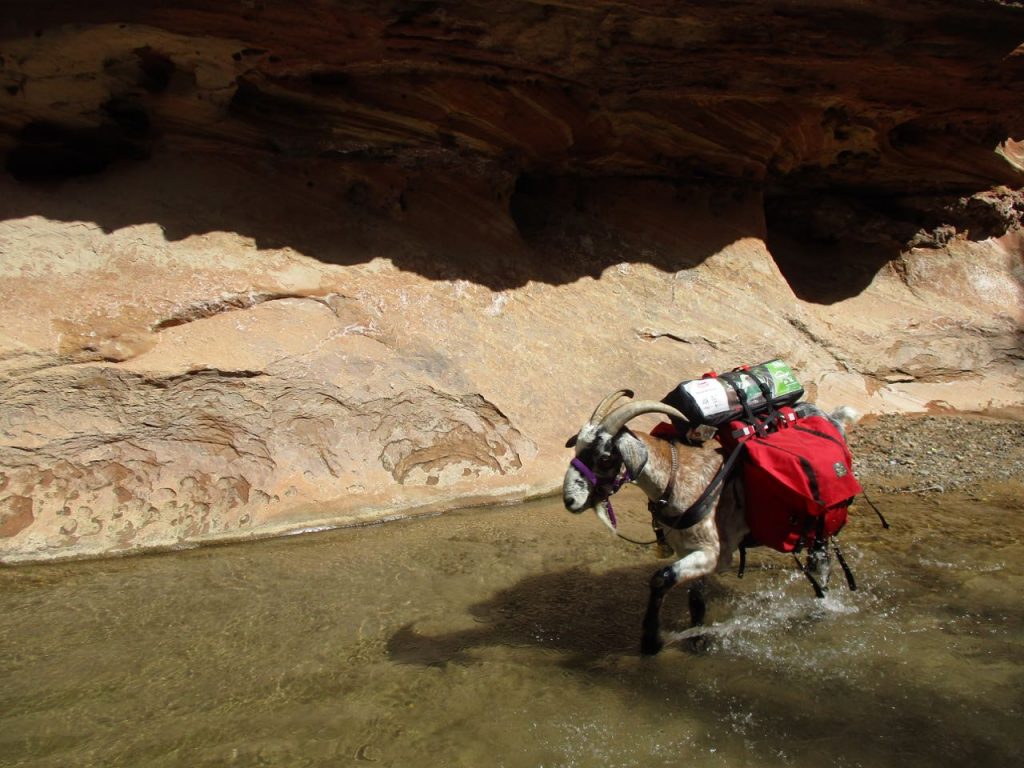 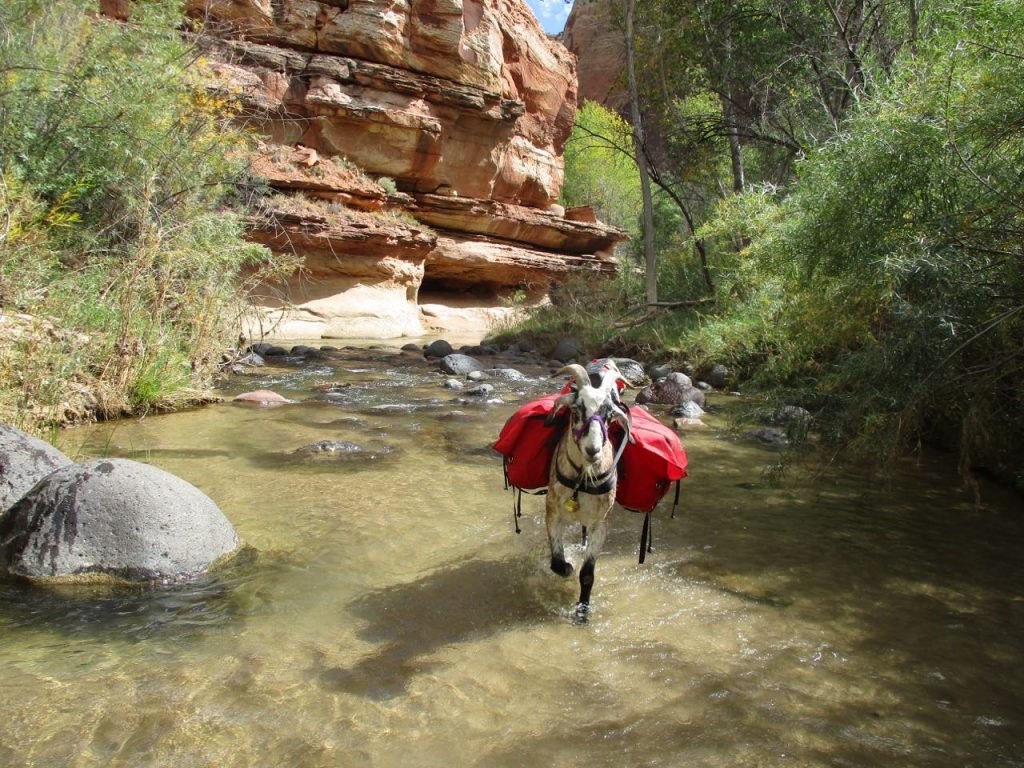 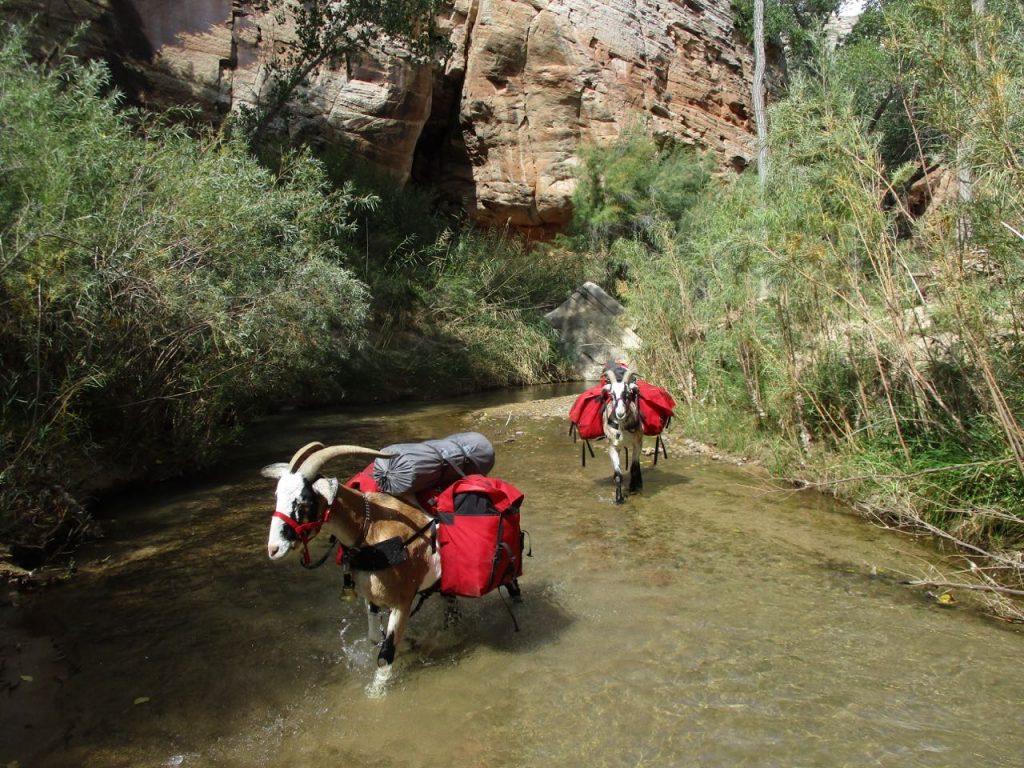 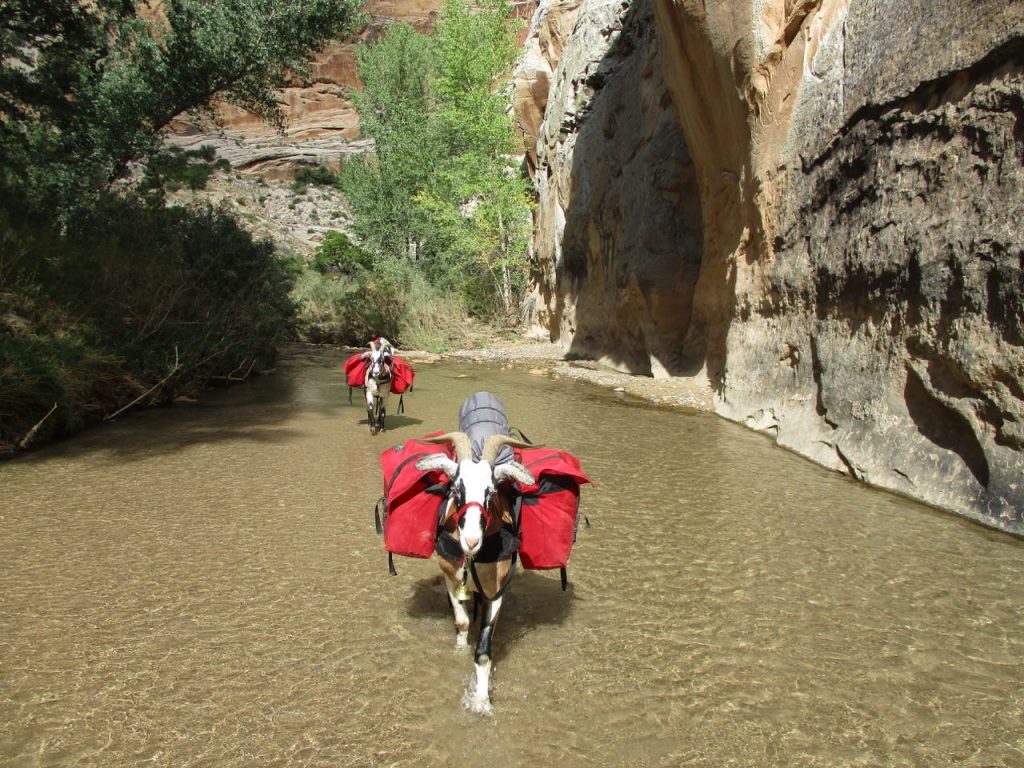 Sometimes when we didn’t hike in the river it felt like we were in the jungle. 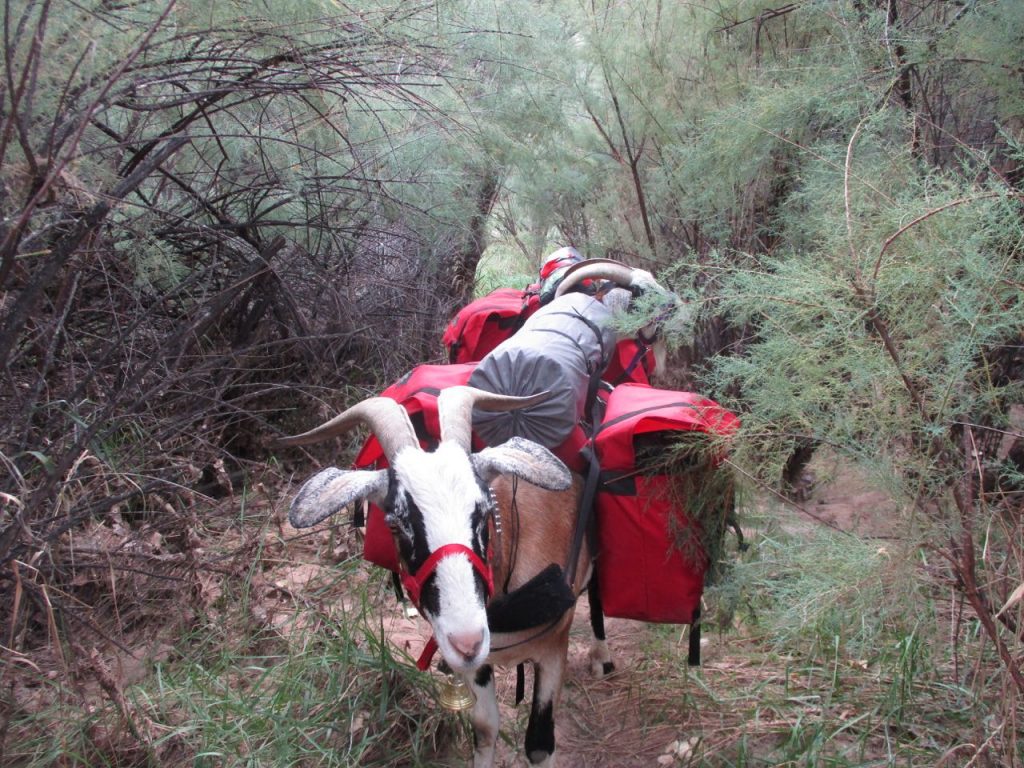 I found a dinosaur footprint! 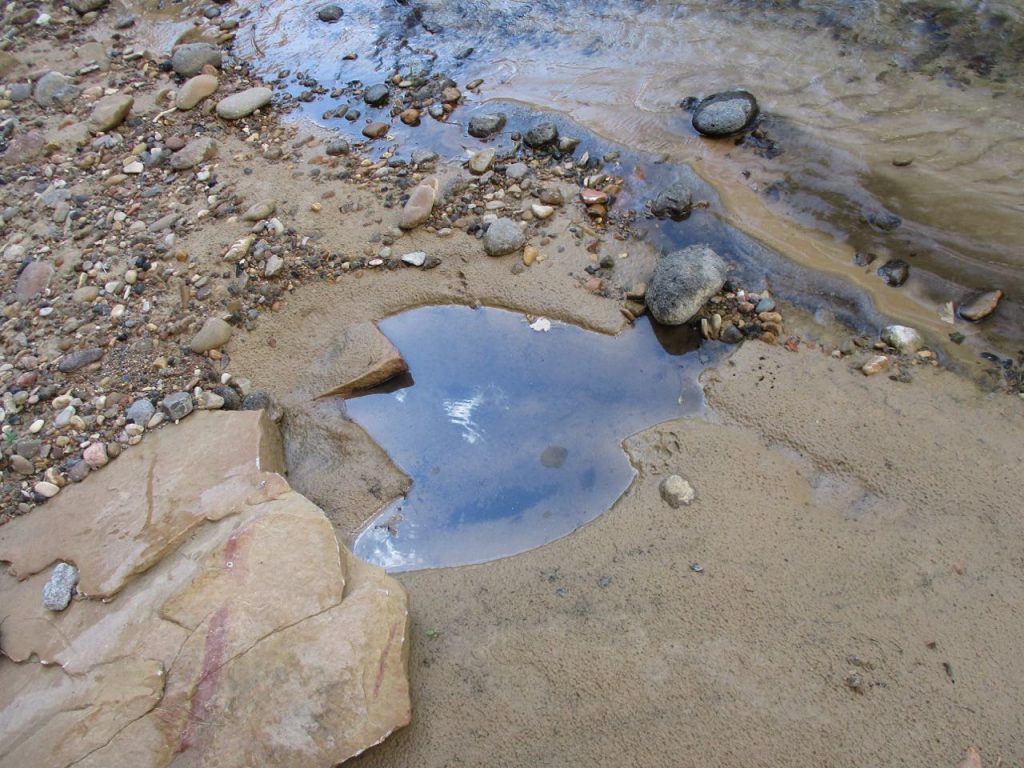 And here we had our first major adventure. You can’t see it in the photo (and because of what ensued I neglected to take one later), but just beyond that alcove, Phil spotted a large donut hole in the rock that was just low enough for him to climb up and sit in it for a photo shoot. I thought Finn could probably jump up there and join him as well. Finn wasn’t so sure and walked over to the sandy spit of beach you can just see at the right edge of the photo. Sputnik followed Finn but he must have taken a slightly different path because all of a sudden he went down to his chest in quicksand. 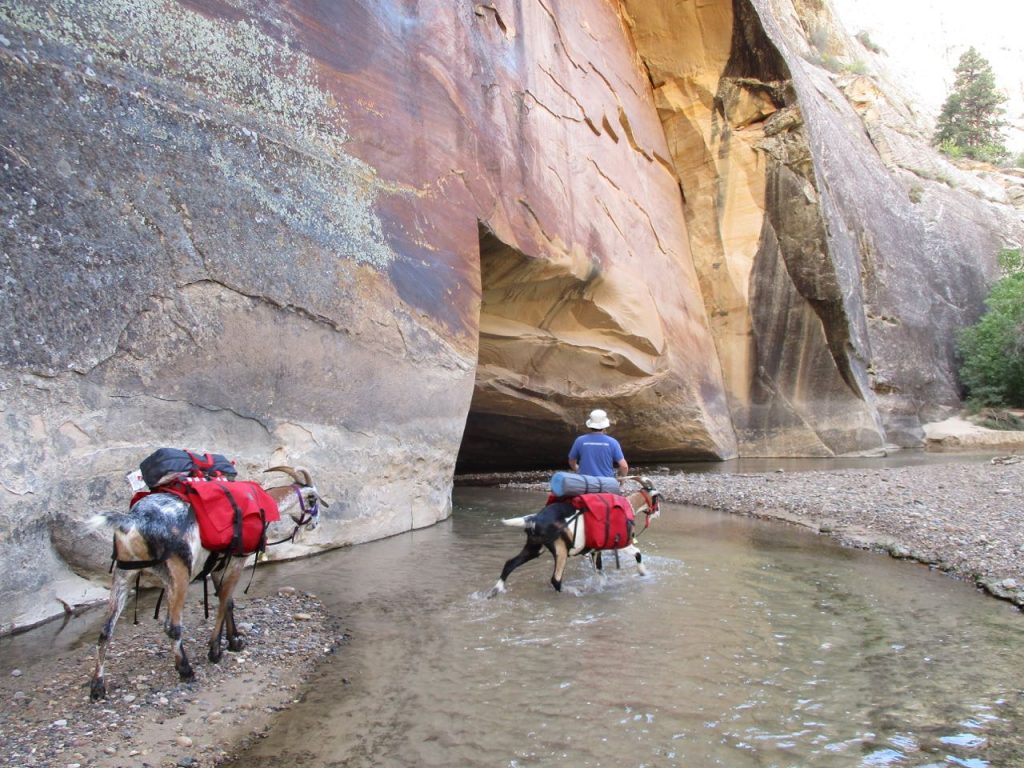 It happened in the blink of an eye. Phil jumped down from his perch while I raced across the creek to help our sinking buddy. I grabbed the leash attached to Sputnik’s halter, untied it from his saddle, and pulled. Phil grabbed Sputnik’s collar and also pulled. Sputnik didn’t budge. He was struggling a little but could hardly move. His pack weighed about 40 lbs. and probably more now that it was wet. Phil and I pulled a couple more times to no avail and I was starting to feel panicky.

We both began fumbling with the straps when Sputnik gave a mighty heave and suddenly he was out! Sputnik and I rushed over to the beach where Finn had been standing and chewing his cud very unconcernedly. I quickly re-fastened the few straps on Sputnik’s pack that Phil and I had managed to unhook before he dislodged himself. Then I turned to look for Phil. He was still standing there in the spot where Sputnik had been and one foot was knee-deep in sand. Phil was stuck in the same quicksand that had trapped Sputnik!

Phil was stuck fast. The sand had created a suction and wouldn’t allow his foot to come out even when he pulled on the rope I handed him. He thought he could free his foot if he slipped it out of his sandal, but we didn’t want to lose that shoe at the bottom of a creek with miles to walk in either direction! I tried to break the suction by working a stick into the sand under his foot, but it didn’t help. The stick just threatened to break. So Phil and I used our hands to shovel sand out of the hole until eventually Phil was able to pass a rope through his sandal. I pulled the rope, hoping to release both Phil and his sandal, but the sandal broke! Phil had put the rope through one of the pull tabs instead of through the sandal straps. Phil dug down once more and after a lot of effort he finally managed to wiggle the rope under one of the big sandal straps. He pulled his foot out and then both of us pulled on the sandal but it wouldn’t budge. I could feel the strap stretching and I was afraid we would break it. So I got down on my hands and knees in the water and dug more sand out of the hole while Phil pulled on the rope. Suddenly the sandal popped out of the water! It was not broken. We were very relieved! 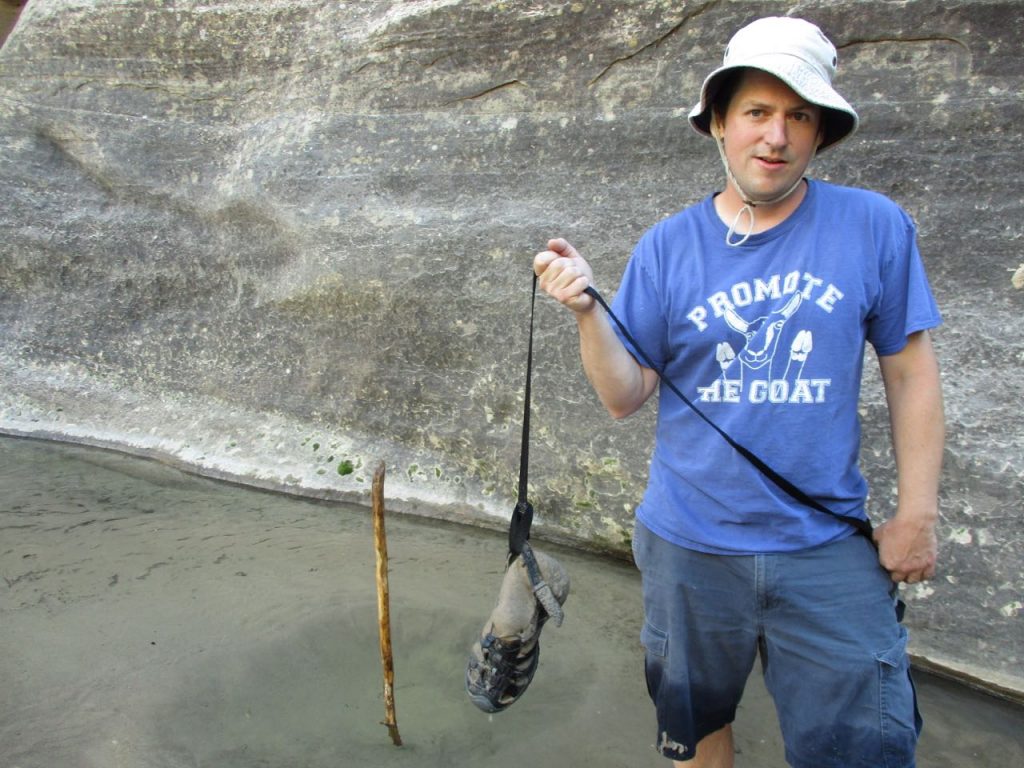 I left the stick in the quicksand hole to warn future hikers. What a scare! I’m glad we didn’t lose Phil, his shoe, or my goat down there! 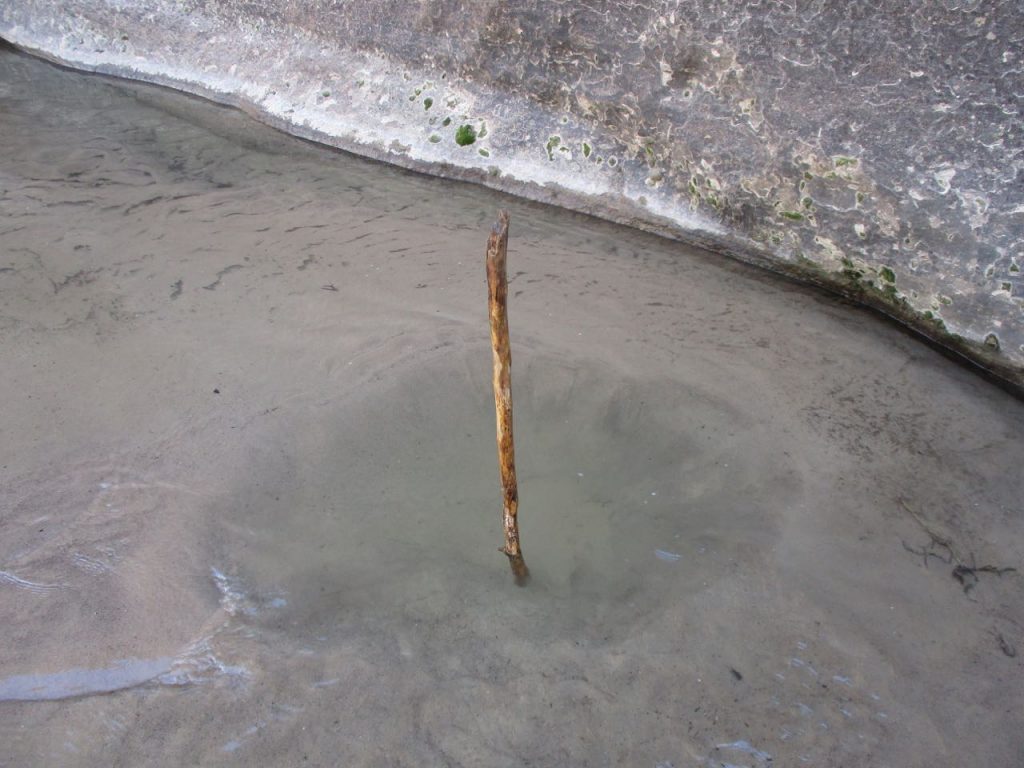 I was wet, Sputnik’s saddle rigging was full of chafing sand, and his panniers were wet, but we were all ok and the camera had only gotten damp. I had remembered to remove my hip pouch before going into the water to help Phil, so nothing important got soaked. A short time later, just as I was beginning to dry off, I slipped on some moss and soaked my entire left side. I was laughing until I noticed my hip pouch was full of water and the camera was bobbing around. I fished it out and handed it sadly to Phil, then dumped my hip pouch out. Soggy goat treats plopped into the creek.

Thankfully we soon made it to our planned camping spot and since no one else was there it was a fairly relaxing evening. I had to wash all of Sputnik’s gear and hang it up to dry along with my pants. We pitched our tent on a comfortable piece of of sand and ate a delicious dinner of beef stew. I made Finn and Sputnik comfortable under a large cottonwood tree where they had plenty of fresh and dried leaves to eat and comfy sand to bed down in. As Phil and I were climbing into our tent, we looked around and noticed a lot of jewel-like things glittering in our headlamps. They were beautiful! On closer inspection they were cute, tiny little spiders. They were everywhere! It’s a good thing neither of us is afraid of spiders!