Today my friend Jordan invited me and another friend to go hiking on the trail to the natural water slides. I’ve only ever been on this trail in summertime and Jordan thought it would be pretty all frozen over. She brought her yearling packgoat-in-training, Geronimo, and I brought Sputnik. We put the little blue pack on Geronimo and he carried a few odds and ends. 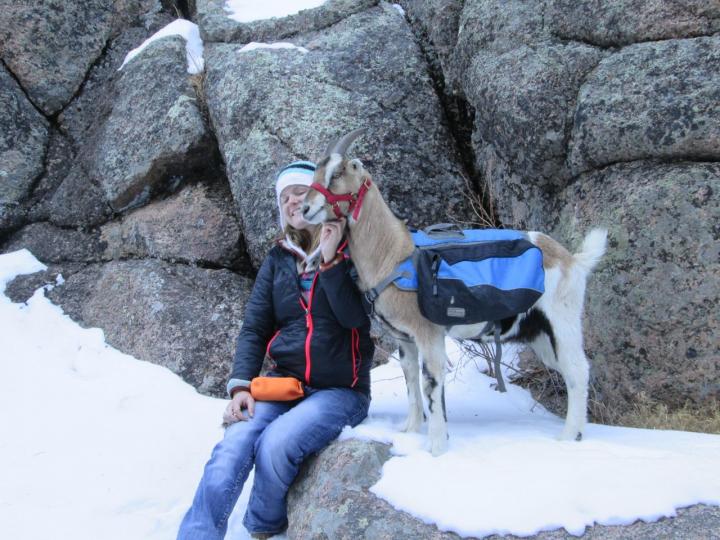 Sputnik carried the crossbuck saddle with a set of horse saddlebags tied on (the normal panniers were overkill). He carried the water bottles, some snacks, and a bit of litter we found along the way. It was a really fun hike and Sputnik was great. He was a little pushy at first because he didn’t have Finn there to keep him at the back of the line, but after getting corrected a couple of times for shoving past people, he settled down and stayed out of everyone’s way. 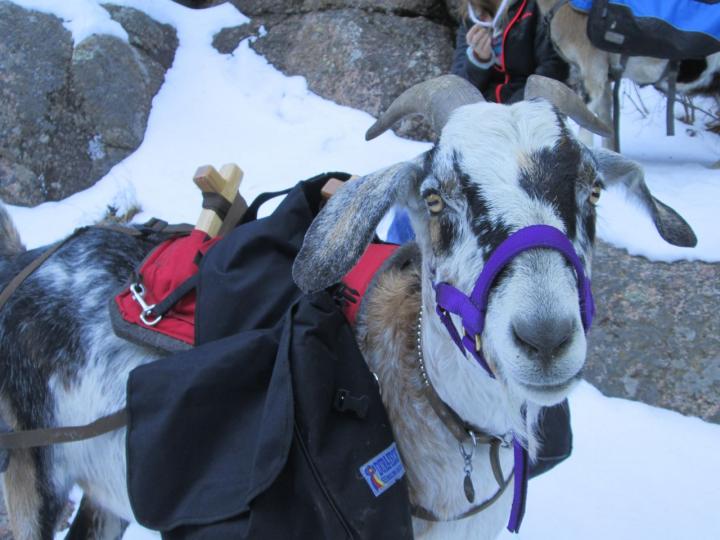 Geronimo was a funny little dude. Jordan has been off at college most of his life so he hasn’t been handled as much as most packgoats his age, but he’s a very chill goat and wasn’t too skittish about wearing a halter and pack. He loved climbing over all the rocks. but he never got out of sight of Sputnik, who was a very good mentor for the little guy. Sputnik showed Geronimo how to cross shallow water without a fuss, but Geronimo wasn’t convinced and twice tried to cross the ice instead. Both times he fell through and got wetter than he would have if he’d just followed Sputnik through the shallow bits along the edge. The creek under the ice was not deep or dangerous, but I’m sure it was cold on the legs! 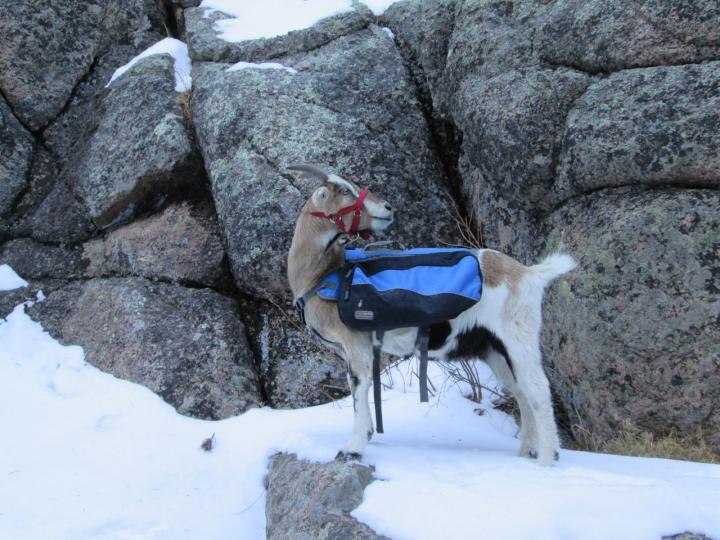 At one point Geronimo got too far away on the wrong side of the creek. Sputnik was following close behind me when suddenly he turned off the trail, walked to the edge of the creek, and called across to Geronimo. Sputnik waited until Geronimo came after us before he started again. It’s cool that he was looking out for our trail companion! Geronimo challenged Sputnik a few times, which was quite comical. They looked like David and Goliath. Sputnik put Geronimo firmly in his place but he was not mean to him. He never hit Geronimo unless he was provoked, and he didn’t hit hard–only enough to make his point. 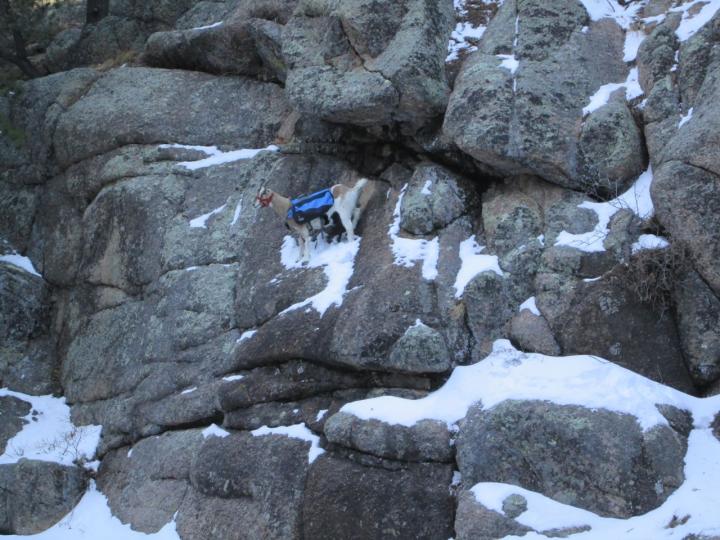 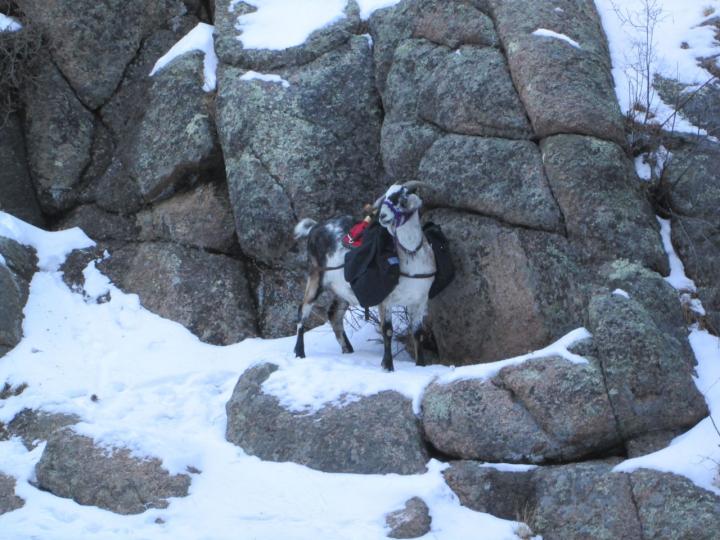 Today Sputnik had his first test of finding an alternate route for himself. We spent much of the hike scrambling over and around boulders, and at one point the gap was much too narrow for Sputnik’s pack. On the way up I removed the pack so he could squeeze through, but on the way back I wanted to see if he could figure out how to scramble up and over the boulders. The alternate route was no picnic and was also not very obvious, but I knew he could do it if he thought it through. It took him a few minutes, and I heard some very distressed cries from the other side of the rocks before Sputnik’s head appeared over the top of the boulders. From there he had a few tricky leaps and bounds to get down to us, but he made it without incident. I think next time he’ll figure out quicker that he doesn’t have to follow exactly in our footsteps if the people route doesn’t work. 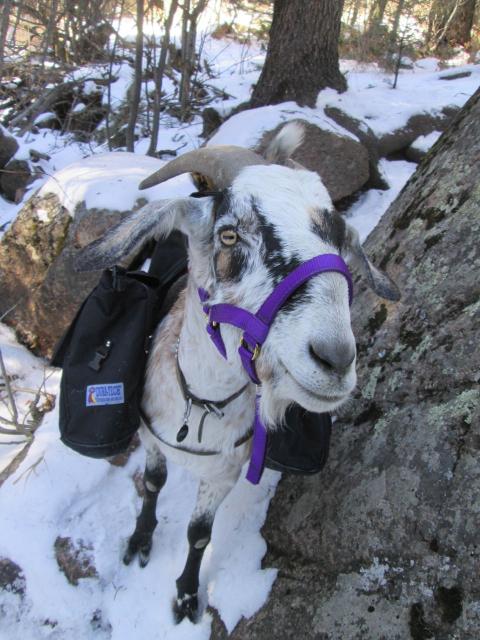 Several spots on the trail were steep and icy. Luckily I remembered to attach a strap to the rings on the back of Sputnik’s saddle which could be used as a handle. It came in handy several times. On the last steep, slippery slope I hooked a leash to my strap and I held on while Sputnik pulled me up the hill. He did a magnificent job. In fact, we went up a lot faster than I wanted and I was fairly out of breath after Sputnik made us run most of the way! That driving has really paid off. I was able to have him “whoa” in front of me while I hooked the leash on. Then as soon as I said “walk on” he headed right on up the hill ahead of me. At one particularly steep spot, Sputnik had me hanging onto his saddle and the two other girls holding onto the tow strap! He wasn’t pulling us up, but he was helping us all balance which was kind of messing with his balance. He got a little balky at the end and turned to look at us like “What the heck do you think I am? A ski lift??” Needless to say, he got lots of praise and cookies. Thanks to Sputnik, no one got stuck or slid backwards down any hills. He took very good care of us and of Geronimo. What a good boy! 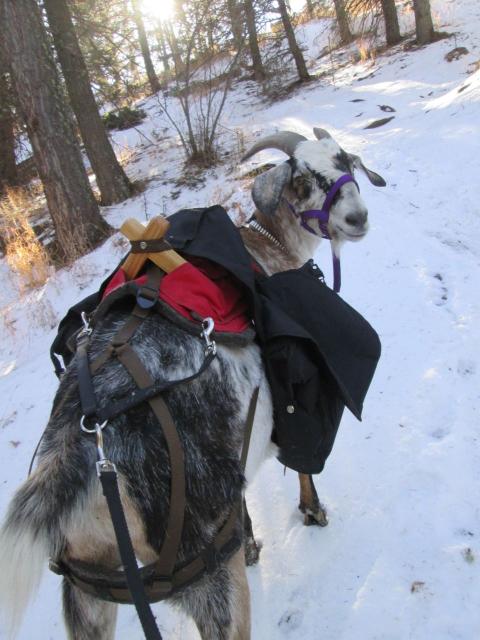