I took Ben Gun & Hawkins for their first hike this week!
https://youtu.be/f3CpGiIfxUE

I’ve got some fun video this week of goats playing and some other critters I came across including hummingbirds & a big spider!
https://youtu.be/-60_jNU_Rs8

Look forward to seeing you there!
-Phil

Lots of fun coming today including a Jeep tour!
https://youtu.be/-6oC8kGhKTY

Catch you there!
-Phil

Good times guaranteed with Goat-o-Rama today!  I had a hard time picking the title for today, since there’s been hikes, horses, battles, and acrobatics!  However, this amazing front-toe-stand by Ashanti stood out as this week’s highlight moment.

Hope to catch you there!
-Phil

Today’s livestream will be 1 hour later than usual!  We’re going out for a hike today!  Hope you can make it!

My folks came to visit this weekend and we had some great goat adventures including a very exciting goat croquet tournament!  To add to the festivity, tonight my dad will be playing with me on a couple of songs!

See you there!
-Phil

This week I’ve got some special songs for fathers and a visit with some of my nieces and nephews!
https://youtu.be/83-lmv3EPng

Hope to see you today!
-Phil

The last two kids of the season were born on June 4th at dusk. Mocha hung around in the pen all day and picked out a nice cozy little corner where she dug herself a pit to lay in. And then she laid in it. And did nothing else. Phil and I kept waiting for her to start pushing but she was determined to take her pretty time. Eventually it got late enough that we had to put all the goats in the pen with Mocha. Finally something started to happen, but when Phil and I came out to attend the birth, all the older baby goats rushed over and began climbing all over us! This would not be a peaceful, quiet birth! So at the last second, with the water broken and a sac peeking out, Phil and I dragged poor Mocha away from her chosen spot and away from the pen so she could deliver without baby goats jumping on her head. I ended up having to assist the birth a little bit. I’m not sure if things were already delayed or if moving Mocha mid-delivery messed baby up, but the kid was stuck like a cork with nose and feet all trying to come out at once. I pushed the head back a bit and gave the legs a tug and with a  few extra pulls, Baby #1 entered the world!

Mocha was surprisingly dramatic. I expected her to be the strong, stoic type, but instead she stretched out on the ground, threw her head back, and bawled as though the delivery had almost killed her. I had to pull on her collar to convince her to sit up and take a look at the new kid. Once she saw the new baby she was smitten and forgot about feeling sorry for herself. 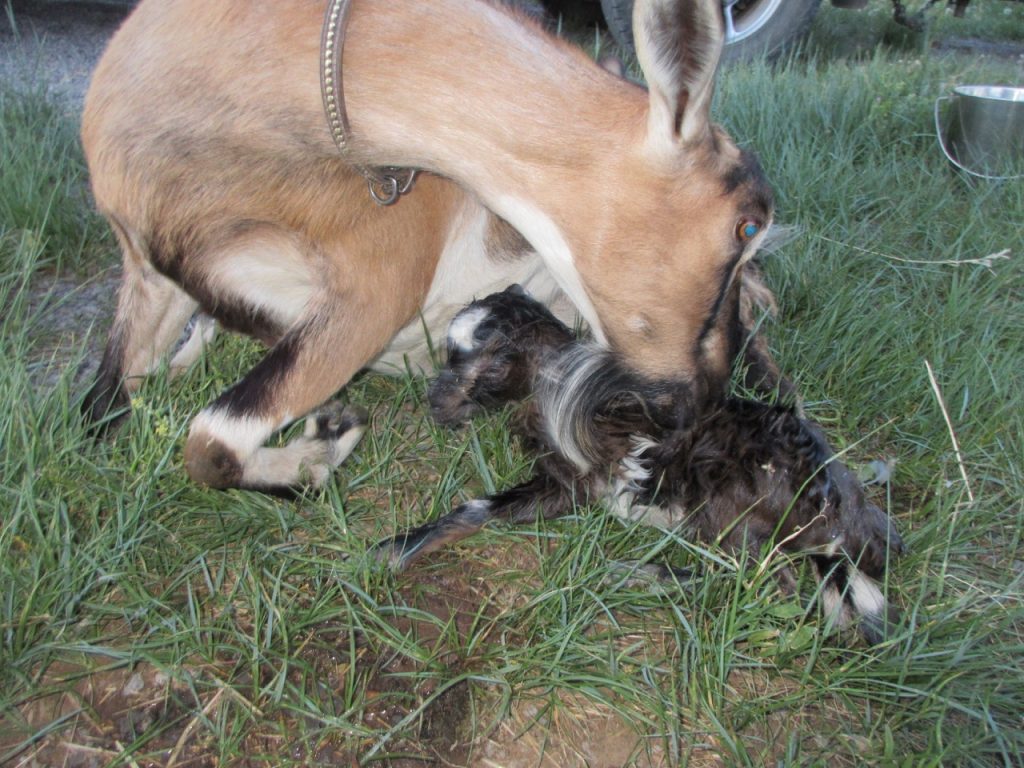 The new kid was a girl about 7.5 lbs and extremely lively! She was standing in less than five minutes and within fifteen minutes she was already starting to hop. I’ve never seen one pop up so fast! 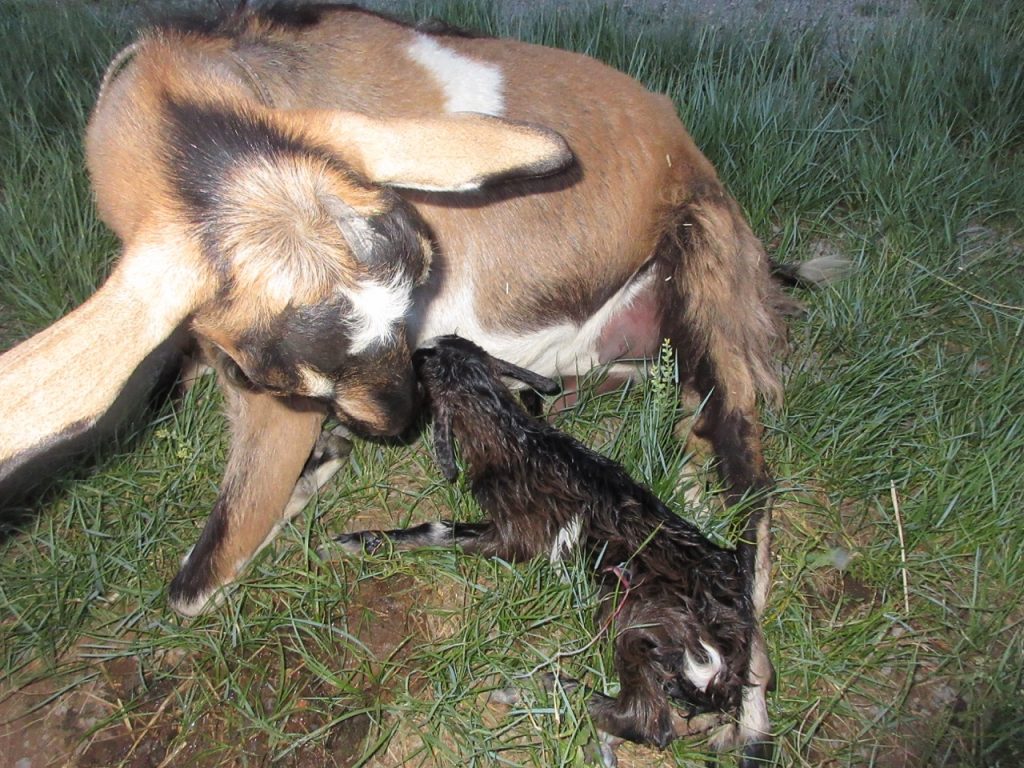 Baby #2 emerged without drama a few minutes later. Another girl! The girls definitely have the upper hand this year! Out of eight kids born in 2021, six are girls and only two are boys. We were not prepared for this unbalanced ratio when we went with a “Return to Treasure Island” theme. There aren’t many female characters in that series. Isabella and Conchita are the only named female roles. Isabella got taken by Snowball’s girl and we have Diamond, Ruby, and Sapphire since those particular jewels are mentioned repeatedly throughout the series. We settled on Conchita for Mocha’s second kid, but what should we name the first? For that one we had to dig deep. In the middle of the series Long John Silver reminisces about his wife–a “woman of color” mentioned briefly in the original Robert Louis Stevenson novel and expounded on in a short but very powerful conversation in the TV series. In the show, Silver says, “Ashanti she were” and it’s unclear if he is referring to her tribe or her name, but that’s what we went with. 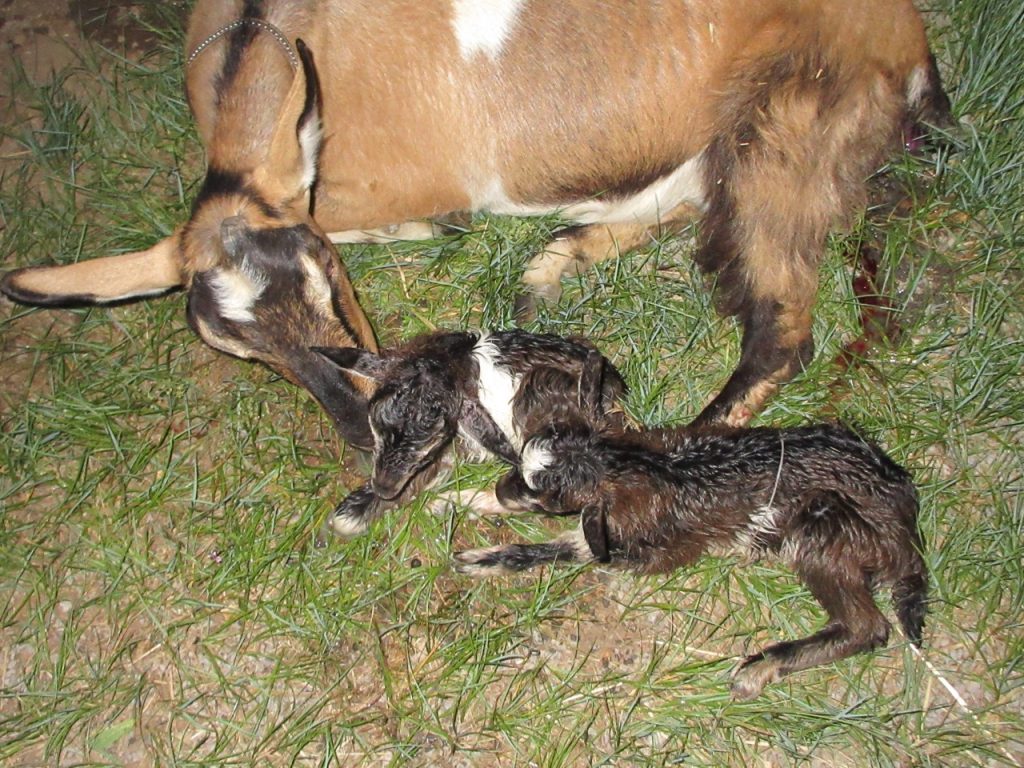 Skeeter takes her job as herd queen very seriously. She stood by the gate and watched the proceedings with intense interest. She always wants to know what’s going on in her herd and how many new babies there are. 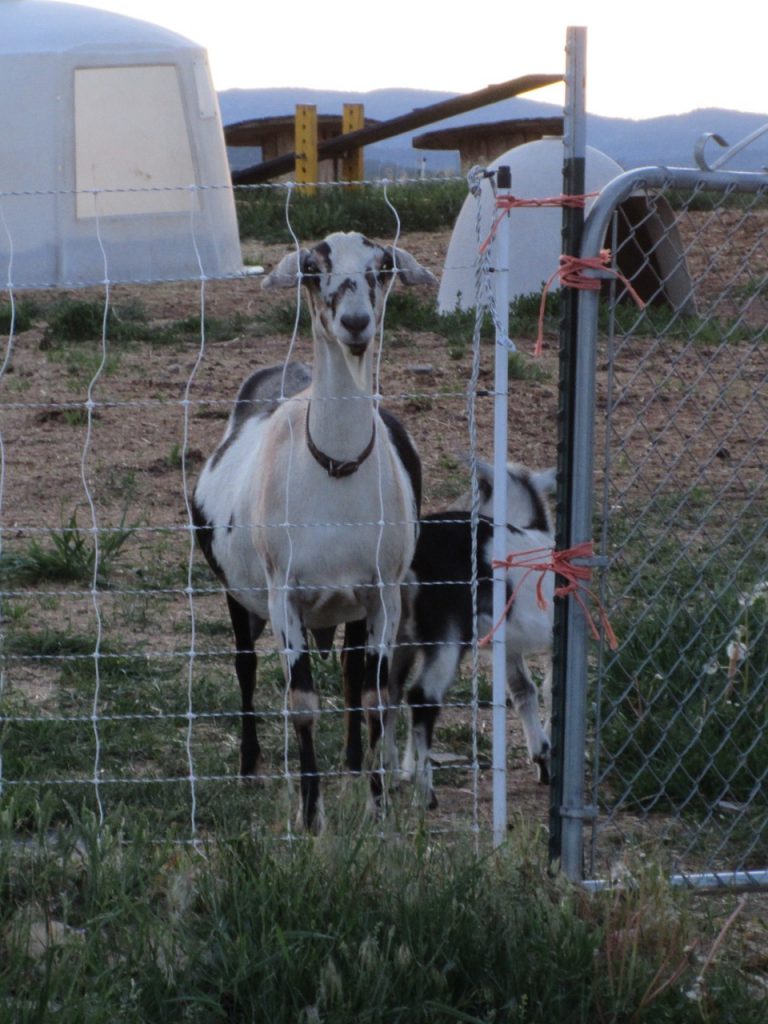 When the birth was over we took Mocha back into the pen and set her up cozily in one of the sheds where she could bond with her new family. 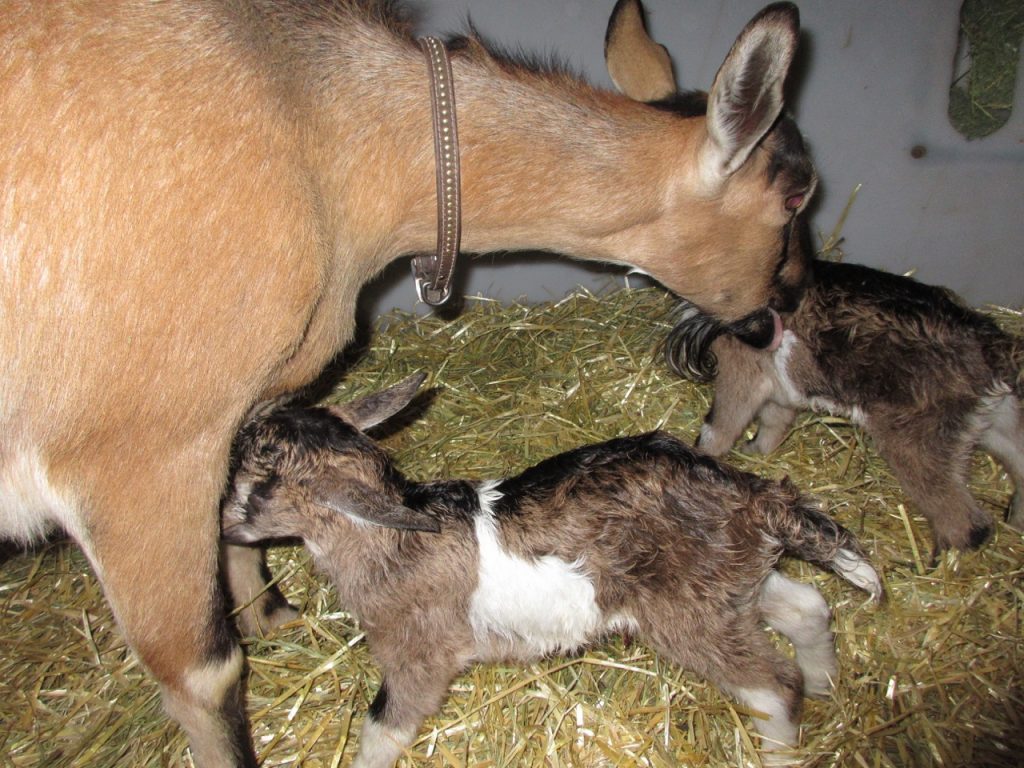 Skeeter followed us over and stood with her head through the gate to make sure Mocha was doing everything right. 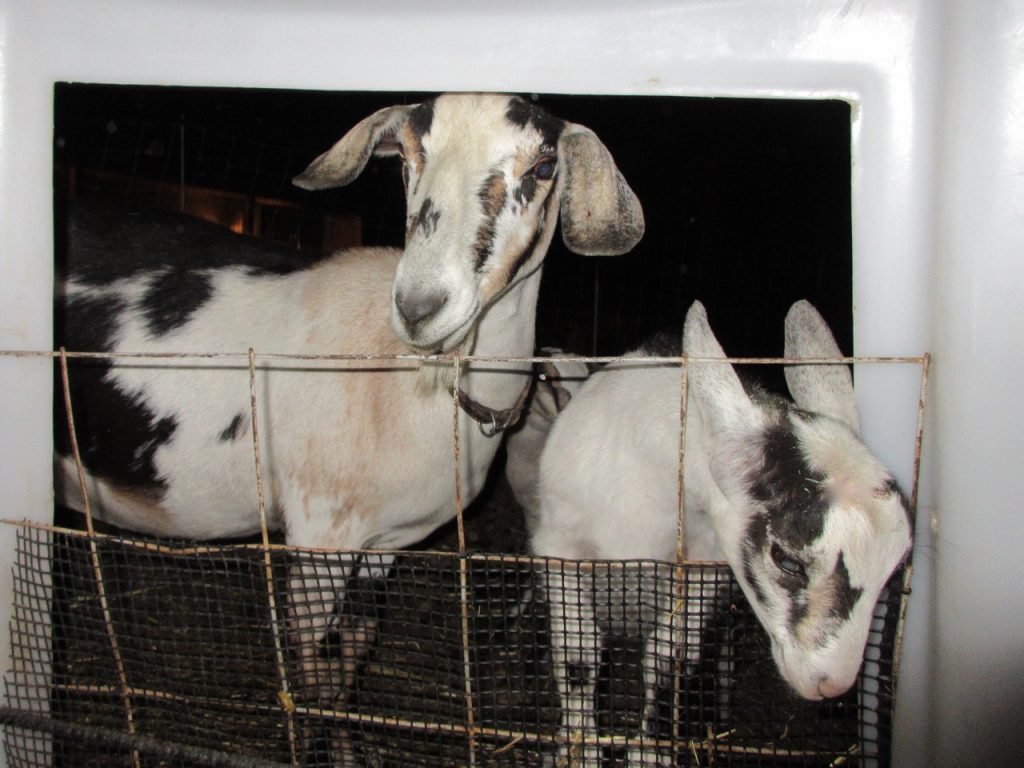 Diamond takes after her mother in more than just looks! She wanted to supervise too! 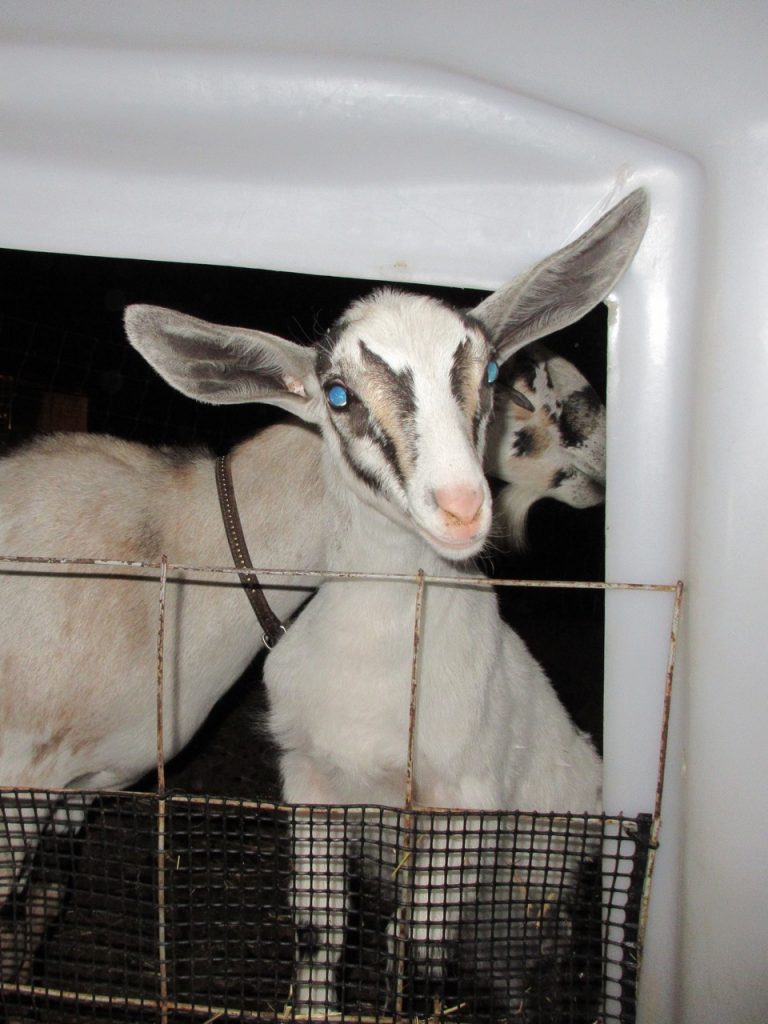